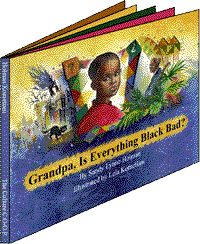 President Obama may improve the image of African Americans, but being black or brown in America is still tough for kids. Sandy Lynne Holman urges educators and parents to action.

The media is touting new films about image and the African American experience – Chris Rock’s "Good Hair," Oprah’s "Precious," CNN’s Black in America, Disney’s Princess and the Frog and Tyler Perry’s films – but talking about self-image is a mission for Sandy Holman, director of The Culture CO-OP, Davis, California.  Holman has dedicated the last twenty years of her career to boosting the body-image and self-esteem of the nation’s youth.  Her focus is on diversity and children who are disproportionately affected by negative messages such as African Americans and Latinos.

Her first book -"Grandpa, Why Is Everything Black Bad?"- won national awards in spite of what her critics called its "negative title."  Holman reads this and her other titles, "Grandma Says Our Hair has Flair" and "We All Have a Heritage," to the nation’s children. The children who read her books know exactly what they mean, and they feel validated by the positive messages inside.  Holman observes that from age three, kids notice when their skin and hair doesn’t measure up to their role models in movies and television.

"Things have reached an epidemic level for our children and the messages they internalize," Holman said, "And still we debate why there are achievement gaps in education, high dropout rates, high incarceration rates and worse."  The negative messages that children of color receive, coupled with insidious institutional systems, are taking their toll.

Holman says it is vital to take collective action because ultimately all of society is affected.  By working with schools, creating community conversations, giving presentations and creating books, songs and other materials, she encourages individuals to intervene in the lives of youth during their formative years.

The Culture CO-OP (Caring, Optimistic, Open-minded People) promotes understanding and respect for diversity, reading and quality education for all. They accomplish their mission through dynamic presentations and research-based multicultural products that incorporate reading, music and the arts for people of all ages and backgrounds. They are preparing to launch the national campaign "We All Have a Heritage" to increase cross-cultural awareness and understanding.