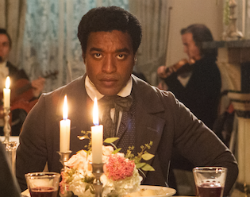 “12 Years a Slave” and “Fruitvale Station” has received nominations for this year’s Independent Spirit Awards.