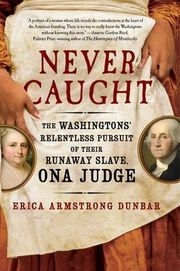 Never Caught: The Washingtons’ Relentless Pursuit of Their Runaway Slave, Ona Judge (37Ink/Atria, 253 pp., **** out of four stars) is a chronicle that throws considerable shade on America’s Founding Fathers for their slaveholding hypocrisy.

In this case, we learn how our first president, George Washington, skirted Philadelphia’s anti-slavery laws during the five years he and his wife, Martha, resided there, while the nation’s eventual capitol was being built — by slave labor, largely — along the Potomac River. As Dunbar, a professor of Black American history at the University of Delaware, recounts, Washington brazenly cycled his slaves in and out of his Virginia home, Mount Vernon, to avoid Philadelphia’s time limit on slaveholding.

But this legal issue is hardly the book’s subject. Instead, the human drama of one particular slave, Ona Judge, a Mount Vernon-born mulatto woman who became Martha Washington’s prized servant, takes center stage. For in her life away from the Southern locus of slavery, Ona Judge breathed the freer air of the Northern states, and in 1796 she famously stole away from the Washingtons, dying free at last in New Hampshire, outliving her owners by nearly a half century.