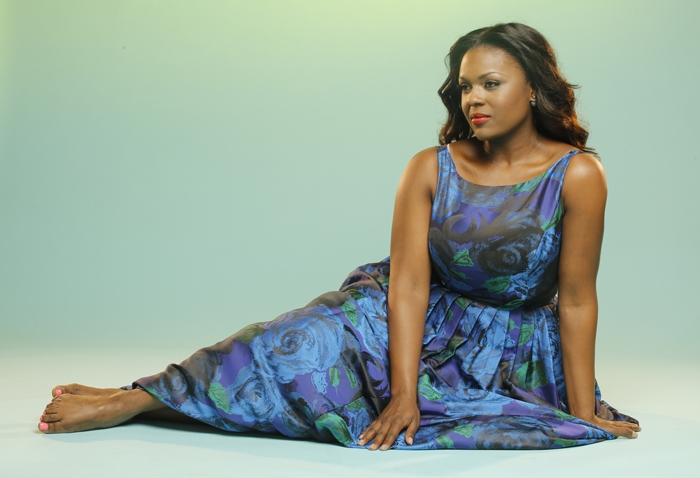 Deborah Joy Winans, one of gospel music’s Winans dynasty and one of the breakout stars of OWN’s Greenleaf, never wanted to sing.  She spent decades eschewing it, in fact, in favor of acting.

You heard me correctly:  a Winans never wanted to sing.  Heck, that family even had the in-laws singing!

As the superb series’ first season prepares to wrap up next week, and OWN releases an accompanying soundtrack album, I had to catch up with Winans and ask her about this “no singing Winans” thing.

“My dad and mom never wanted to force us into the singing thing,” Winans, 32 told me.   “They wanted us to find our own path.  Singing was just never a passion.  Since I was a little girl, I felt that acting was what I was called to do.”

Winans acted on that calling, ultimately earning Bachelors and Masters degrees in theater.  As she performed in workshops playing CeCe Winans for the stage play Born For This, Winans caught the eye of a woman in the audience who would guide her towards God’s purpose for her life — and her own heart’s desire.

“I was at a point of asking God whether acting was what He really wanted me to do,” Winans recalled.  “Oprah Winfrey came to one of my workshops, and a couple of months later she reached out to Uncle BeBe, who co-wrote Born For This.  Oprah told him she was interested in me for the role of “Charity” on Greenleaf, and asked him to help her contact me.”

“I was floored that she remembered me,” Winans continued.  “For someone like Oprah to recognize a gift in me and remember me gave me the boost I needed to keep going.”

A couple of months later, Winans auditioned for and earned the part…playing a choir director and singer!

“God’s probably laughing at me as we speak because the two roles that I get involve singing — to the max!” Winans said.  “I am being forced into the singing thing!  Acting is what I do and what I love.  I was worried, because of who I am, that people would automatically assume that I’m a singer.  But then I realized that God had opened the door, and I will continue to grow into whoever it is that He’s called me to be.”

To date, it appears that the “listening to God” thing is working for Winans.  She earned rave reviews in productions of Born For This in Atlanta and Washington DC earlier this year, and you’re missing out if you’ve not caught her on the superb Greenleaf, which airs Wednesday nights on OWN.  Winans shines throughout, more than holding her own in a cast that includes Winfrey herself, veteran actor Keith David, and the legendary Lynn Whitfield, who plays Charity’s mom.   One of my favorite scenes so far featured Winans’ character verbally sparring with Whitfield’s — and coming out on top.

“For a long time, Charity has felt unappreciated and devalued by her family,” Winans said of her character.  “Instead of taking a stand with them in the beginning, she found her husband Kevin.  They fell in love, and she’s at her best when she’s with him.  And so to have that going down the drain, now she doesn’t know what’s going on and with her family still treating her like a stepchild, she had to stand up somewhere, somehow…something had to happen.  That’s when Charity gets the nerve to really stand up for herself and force her family to respect her.”

“Coming from such a big family, it’s easy for me to understand how it feels to be overlooked,” Winans continued.  “I have 19 first cousins!  It’s hard for our entire family to keep up with what we’re doing and let us know that they’re proud of us.  So I understand what Charity’s going through, but I think she’s gotten to a point where she ain’t taking no more foolishness.”

A side of Charity that she doesn’t share with Winans is the character’s love of singing — but you wouldn’t know it from the actor’s scenes with the choir on the show.  For example, Winans performed a brilliant cover of Rascal Flatts’ “Broken Road” on the program a few weeks ago that, literally, left me in tears.  The upcoming soundtrack album features that song and several others by Winans, along with selections by legends like Shirley Caesar, Dottie Peoples, and Mavis Staples.

That’s not too shabby a lineup for a first album, especially for a woman who says she never wanted to sing.  In fact, when she went in to record the songs for the album, it was the first time Winans had been in a recording studio!

“I was in tears the first time, I was so nervous,” Winans recalled.  “It’s really crazy to me!  I’m like ‘Lord, is this really happening?  I don’t know what You’re doing, and this is actually kinda funny, but OK, I’ll go with it.’”

“And to be even on the same record as Shirley Caesar?’, Winans continued, “is incredible.  I’m so honored, so humbled, and so excited.”

Winans told me we should all be excited about Greenleaf’s season finale, which is scheduled to air next week.  While she wouldn’t give up any details — and God knows I tried to get something out of her!  — she insisted that fans of the show are in for a major cliffhanger that will keep fans talking before season two premieres in 2017.

“Things are unraveling,” Winans said of the Greenleaf family.  “It’s nice to see that people who’ve been put on a pedestal are human, to be reminded that your faith and your hope and your trust cannot be in man.  Man will fail you.  It’s nice to see how they act and react to their mistakes, and how they try to get it right.”

In talking with Winans, I got an immediate feeling that she is going to be around for a long time, continuing in the Winans family tradition.   I had to ask her what we could look forward to from her down the road.

As we wrapped up, Winans asked for a second to express her thankfulness for the blessings that have come her way.

“All of this is really new to me,” she enthused.  “I’m grateful that you wanted to talk to me, and that you like what you’ve been seeing.   I’m thankful to God for all of the doors He’s opening.  It’s been nothing short of incredible.”

Greenleaf airs Wednesday nights on OWN, the Oprah Winfrey Network.

The Greenleaf soundtrack is available August 26 on iTunes and retail everywhere.

This feature was written by freelance writer Michael P Coleman.