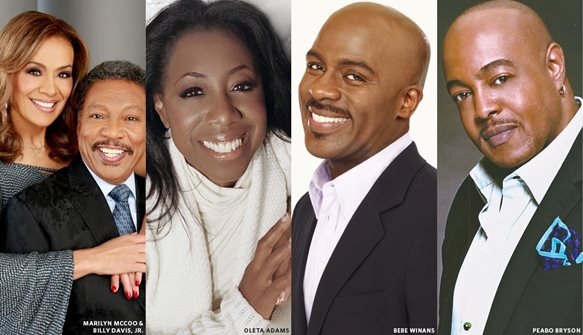 A couple of years ago, when I first asked vocal titan Peabo Bryson about his decades-long association with the annual Colors of Christmas, he told me it was hard to put the show into words for someone who’d not experienced it.

He was right.  Just a few days later, the show at San Francisco’s Davies Hall, with the San Francisco Symphony, absolutely blew me away.  After that first performance, I vowed to see Colors of Christmas every time I had the chance.

Those opportunities are coming to an end.  After 22 years, the San Francisco Symphony is closing the curtain on Colors of Christmas at Davies Hall.

Colors of Christmas is a peerless blend of holiday favorites and chart-topping hits performed by Bryson and some of the absolute best R & B and pop vocalists who have ever walked the planet.  Bryson’s been a part of the show since Colors’ inaugural performance in 1993, and he is an absolute vocal powerhouse on stage.  If you’ve never heard Peabo Bryson live, you’ve never heard Peabo Bryson.

The voice behind “Beauty & The Beast” and “A Whole New World” (from Disney’s Aladdin) was joined by legends Patti Austin, Roberta Flack, and Jeffrey Osborne during that first show.  With a sterling lineup like that, Colors was bound to let us down in subsequent years…but it didn’t, delivering a magnificent show year after yuletide year with artists like James Ingram, CeCe Winans, Ruben Studdard, Melissa Manchester, and Jennifer Holiday.

McCoo & Davis will take the stage on December 14 and 15 with Bryson, along with BeBe Winans and Oleta Adams.  All are excited to be coming back to San Francisco, while a little sad that Colors of Christmas is coming to an end.

Adams has performed as a part of the Colors of Christmas ensemble several times over the years, and has loved coming to San Francisco for the performances.

“San Francisco somehow has gathered the best of everything,” Adams told me, in the same sultry voice that her fans have loved for decades.   “The people there have such a wonderful spirit, both the audience and the orchestra.  It’s great to work with people who enjoy what they do as much as they do.  There’s absolutely no better place to be — it just reeks of the holidays.”

McCoo and Davis have also been a part of the Colors troupe several times over the years.

“We have always enjoyed the opportunity to sing our hits as well as celebrate the Christmas season,” McCoo shared.  “Christmas is a very special time of year, and it’s important to our faith.”

Over the last three decades, few have sung God’s praises better or more successfully than gospel superstar BeBe Winans, who is new to the Colors of Christmas lineup this year.

“I was thrilled to be able to join the show this year,” Winans told me.  “But I told the tour manager that I might lose my concentration, because Peabo is one of my all-time favorite male vocalists.  I ask the audience and my fellow artists to excuse me if I miss a few words on stage, because I’m going to be listening to Peabo!,” Winans added with his trademark hearty laugh.

Bryson himself is, understandably, a bit melancholy about this year’s final Colors of Christmas performance.

“We’ve always enjoyed working with the San Francisco Symphony and look forward to working with them in the future,” Bryson told me by phone.  “Colors of Christmas has been extremely successful.  It’s an institution.  People actually plan their vacations around this show.  People have met lifelong friends at this show, and they have come every year.  There’s been a unique element to this show, always, and we’re very grateful to the San Francisco Symphony for the opportunity to present this show for over two decades.”

Both the December 14 and 15 Colors of Christmas shows are sold out.

Look for The Hub’s exclusive, extended profiles on Oleta Adams and BeBe Winans at sacculturalhub.com in the coming weeks.