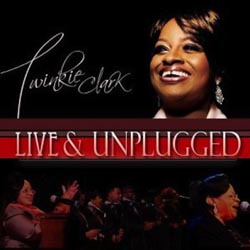 If you’re a fan of The Clark Sisters, contemporary gospel music, amazing harmonies, or you have a pulse and two ears that work, you’ll love Twinkie Clark’s new Live & Unplugged.

The gospel legend starts out on a high… or more accurately, a hiya with “Hiya – So Much He’s Done For Me”, and morphs into “Hallelujah Remix”, a redux of one of her original classics with her sisters, The Clark Sisters.  This version reunites the Grammy-winning quartet, and they’ve lost NONE of their vocal power or fervor.  The track illustrates all of the best of this album and showcases Clark’s enduring ability to effortlessly bridge traditional gospel (not to mention jazz, blues, and classical) with contemporary sounds and trends.

Other standouts include “God Gave Me Favor”, which was inspired by a near fatal head-on collision Clark survived over a decade ago.  By the time you hear her testimony at the end of the track, you’ll be shouting right along with Twinkie and will recall The Clark Sisters in their heyday.  Similarly, “Bless That Wonderful Name”, “Fix Me Jesus”, and “Speak Lord” are CLASSIC Clarks, with the latter featuring the singer’s younger sister Karen Clark Sheard.

Another of the album’s highlights is “There Is A Word”, a duet with Clark’s nephew (and the album’s producer), Larry Clark.  It’s wonderful to hear the collaboration, and know that the anointing’s been passed on to a third generation of the Clark family.  (Twinkie Clark’s mother was the late, legendary Dr. Mattie Moss Clark.)  The track’s even stronger knowing that Clark learned the song just minutes before she recorded it.

“I’m hoping “There Is A Word” propels the project,” producer Larry Clark exclusively told THE HUB.  “I was teaching Auntie the song on the way to the venue.  She was so nervous about recording it… that’s why I sing first on the record, and then she comes in.”

Most surprisingly, perhaps, is the strength of Clark’s voice throughout the album.  She hasn’t lost a note of that amazing range, and at times sounds even more powerful than she did 20 years ago.

The album is packaged with a DVD of the concert, which was recorded at the Charles Wright Museum of African American History in Detroit.  It would make a wonderful stocking stuffer this Christmas, but make sure you pick up a copy for yourself, too.   You might miss your blessing if you don’t.

Live & Unplugged is available on iTunes, at Amazon, or at www.larryclarkgospel.com.

Look for THE HUB’s exclusive interview with Twinkie Clark on www.sacculturalhub.com soon.