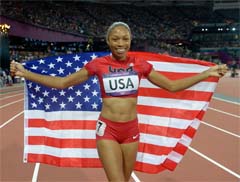 One of the most accomplished sprinters in track history gave the upcoming USA Track & Field Championships a burst of star power Monday when Allyson Felix entered the 400 meters for the June 25-29 competition at Sacramento State.

Felix, the IAAF World Athlete of the Year in 2012, is returning to form this season after a torn right hamstring knocked her out of last year’s World Championships in Moscow. Since sprinting onto the international scene as a teenager in 2004, the Southern California native has won four Olympic gold medals and a record eight gold medals at the World Championships.

Felix joins a 400 field in Sacramento that includes Olympic champion Sanya Richards-Ross. Based on 2013 results, however, neither Felix nor Richards-Ross will be the favorite. Francena McCorory, a teammate of theirs on the 4 x 400 relay team that won Olympic gold in London, has the fastest U.S. time of the season at 50.15 and has won several big international races.

Joining Felix as a final-hour entry in the USATF Championships is intermediate hurdler Michael Tinsley. Tinsley finished second at the 2012 Olympics and the 2013 World Championships.

More than a dozen of the individual champions from last weekend’s NCAA Division I Outdoor Track & Field Championships in Eugene have entered the USATF Championships, which begins June 25 with the Capitol Shot events at the state Capitol and continues through Sunday, June 29, at Hornet Stadium.

Tickets are available at www.sacsports.com.

For more information on the 2014 USATF Championships, visit www.sacports.com and www.usatf.org.