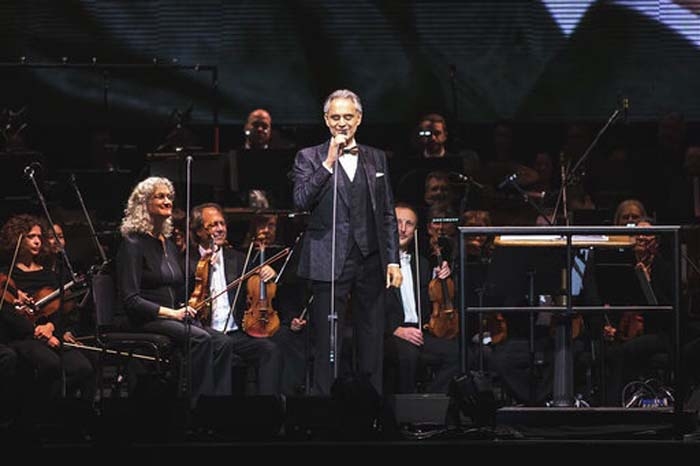 If you can catch internationally renowned tenor Andrea Bocelli in concert, do so. God wants to show you what your ears are for.

San Francisco was the first stop on Bocelli’s 2019 US Tour, and one of only eight North American cities to host him before year’s end.

Last night, the legend told a capacity crowd, near the end of his two hour San Francisco debut, that it had been quite some time since he had come to the Bay Area.

“The last time, my hair was very black. The hair is changed, but the heart is the same,” Bocelli warmly joked, between roaring, standing ovations that rattled the Chase Center almost as much as his phenomenal voice did.

If San Francisco is a barometer, Bocelli’s millions of fans hold unchanged hearts as well. Their affection for him, and admiration for that voice, has been steadfast over the last two decades.

Bocelli was, predictably, in fine voice last night, barreling through classical and pop favorites like no other. He shared the stage with the equally impressive vocalists Larissa Martinez & Pia Toscano, elegant dancers Brittany O’Connor & Jordi Caballero, and virtuoso violinist Caroline Campbell, along with the phenomenal San Francisco Symphony and Chorus.

I’ve been blessed to see Bocelli with several symphonies, but have never heard one support him like the San Francisco Symphony did last night. They, along with all who shared the spotlight with Bocelli, were utterly magnificent.

But at the end of the day, everyone had come to hear Bocelli’s once-in-a-lifetime tenor, a voice that brings light to a darkened world, hope to the downtrodden, and tears to unprepared eyes.

Two of those eyes were mine, first during “If Only,” one of the many highlights from Bocelli’s masterful Si Forever album. During an exclusive interview a couple of weeks ago, Bocelli told me that every song he sings from the new album is his favorite when he is singing it.

It showed. “If Only” magically takes on a new dimension live.

Other highlights of the night included “Ave Maria,” “Ode To Joy,” and “Time To Say Goodbye,” as well as “Return To Love,” also from the new collection. And Toscano’s version of Celine Dion’s “All By Myself” improved upon the original.

After a dozen or so selections, Bocelli left that San Francisco stage as any master would have: with his adoring fans clamoring for more.

Bay Area fans will get their next chance on June 13, when Bocelli will play the SAP Center in San Jose. Tickets go on sale December 16.