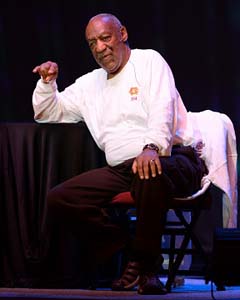 Criticism of one of television’s most beloved stars is escalating with renewed attention to allegations that he sexually assaulted women in several incidents decades ago.

The latest evidence is the cancellation of a planned appearance by Mr. Cosby, scheduled for Wednesday, on David Letterman’s late-night show on CBS. The show declined to say on Friday whether Mr. Cosby withdrew from the appearance or the show made the decision to replace him. “We can’t comment on the booking process,” a spokeswoman for the show, Kim Izzo-Emmet, said.

On Thursday, The Washington Post posted online a first-person article by a former actress named Barbara Bowman, who said that Mr. Cosby had drugged and raped her on more than one occasion in the mid-1980s during a period of time when he was mentoring her as a young actress. That was at the same time he was starring in the biggest hit on television, “The Cosby Show.”

CLICK HERE for the complete article at the New York Times.