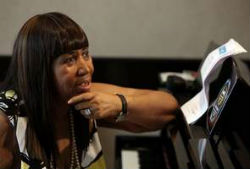 The Queen of Soul, Aretha Franklin, is reportedly back in the studio to record her next album, according to an article on the website of the Detroit Free Press.

According to the article, Franklin will be working with Clive Davis, Kenny “Babyface” Edmonds and Don Was on her new album, which she’s expected to start recording in late November.

Franklin is also reportedly back to full health after medical issues that had caused her to cancel some singing engagements over the summer.