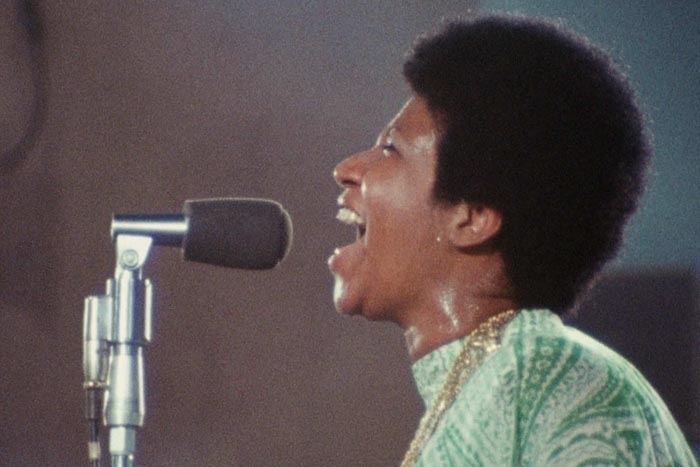 Just a few minutes into the phenomenal new documentary Amazing Grace, I put my near-full bag of popcorn down.

Grandma Coleman always admonished me about eating in church.

There could be no greater swan song by the legendary Aretha Franklin than this energizing film.  Recorded almost 50 years ago, Franklin’s double album of the same title is her greatest artistic accomplishment.  Technical glitches kept the movie from being released decades ago, but with those problems solved, the world gets to see the step-by-step recording of the landmark project.

When a singer can reduce gospel legends like the Rev James Cleveland, with whom Franklin recorded Amazing Grace, and Clara Ward to tears, you know she’s singing.  Franklin had a similar effect on The Rolling Stones’ Mick Jagger, who can be seen throughout the film clapping, singing, swaying, and caught up in Franklin’s rapturous performance, as was everyone else who was lucky enough — who was blessed enough —to have been at the New Temple Missionary Baptist Church.

Masterfully directed by Sydney Pollack, the documentary affords you a front-pew seat inside of that house of worship.  As far as highlights go, one need only look to the album’s track listing — each song and performance is stellar.  If you’ve not heard Franklin’s version of the title track, prepare to never need to hear anyone else sing the beloved hymn again.  And The Queen Of Soul kicks the first night off with a rousing rendition of Marvin Gaye’s “Wholy Holy,” reminding us that she was brilliant at both the piano and microphone.

In additional to the music, recorded with the incredible Southern California Community Choir, I was profoundly moved by the spoken word passages by both Cleveland and Franklin’s father, the Reverend CL Franklin.  The elder Franklin’s love for his daughter was palpable, and at times, Aretha appeared almost as a little girl, beaming as her father spoke proudly of her.

Recorded over the course of two consecutive nights, Amazing Grace was a phenomenon that quickly became the best-selling gospel album in history when it was released in the spring of 1972.  It is still the best-selling gospel album in history.  After seeing this film, you’ll understand why millions of music fans were led to add the album to their collections.  And I’ve a feeling that this film will help millions more discover it for the very first time.  In doing so, they’ll discover The Queen Of Soul’s crowning achievement.

Amazing Grace (2019) is showing at the Tower Theatre in Sacramento.

Amazing Grace – The Complete Recordings is available at all major digital outlets, at Amazon, and at Dimples Records in Sacramento.