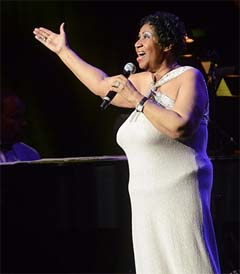 At 72, the Queen of Soul has been a royal mostly in repose, laying low over the past decade; canceled shows and reports of ill health haven’t been encouraging. But with news of a major LP nearing completion, Aretha Franklin’s two-night run at Radio City Music Hall in New York City — a make-up for dates postponed in January — felt like a comeback, albeit a low-key one.

Low key for a queen, that is. On the first night, after a fanfare by her big band (led by longtime collaborator H.B. Barnum and featuring an 11-piece brass section), Franklin strode out in a lipstick-red off-the-shoulder gown and a fur stole, which she tossed onto the Hammond organ console. What followed was an uneven set that often felt like a private party, complete with Facebook-y slide show, rambling shout-outs to colleagues, a lengthy joke about a dog that ate Jimmy Choo footwear and, periodically, incredible singing.