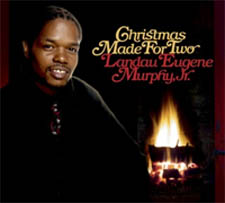 ARTIST PROFILE & ALBUM REVIEW – LANDAU EUGENE MURPHY, JR.
The “America’s Got Talent” Winner Continues To Surprise, and is Committed To Helping Others

Landau Eugene Murphy, Jr. took reality TV viewing audiences by storm two years ago, wowing the “America’s Got Talent” judges and studio audience (not to mention fellow contestants) with his pitch perfect renditions of songs from the Great American Songbook.   In a world where we can still be quickly judged by the hoodie we wear, the dreadlocked Murphy defied stereotypes with a vocal style, tone, and phrasing that’s eerily reminiscent of Frank Sinatra.

This guy’s got quite a backstory.  He was homeless in Detroit not all that long ago, and was washing cars to support his wife and family when he decided to audition for “America’s Got Talent”.  After winning the competition and taking home the $1 million prize, then headlining in Las Vegas, he recorded his debut album, That’s Life, in just three days.  That excellent album went straight to number one on Billboard’s Jazz Albums chart.

Just in time for the holidays, Murphy has released his follow-up, a swinging affair called Christmas Made For Two.  If you’re a fan of the music of Nat “King” Cole, Sinatra and other pop vocal titans, this is an album for you.

“Everywhere I’ve gone in the past two years, people kept asking me if I’d do a Christmas album,” Murphy says.  “I love holiday music, and I’m happy to give folks what they want.”

Seven of the classy album’s nine tracks are time-worn favorites like “White Christmas”, “Let It Snow, Let It Snow, Let It Snow”, “Santa Claus Is Coming To Town”, and “I’ll Be Home For Christmas”. I happen to prefer Christmas albums that stick to the classics, and if an artist does those songs justice, I’ll afford them a lesser-known song or two.  This album sticks to that formula, offering us two new songs: “Quiet Christmas” and the title track.  As well as Murphy sings the classics, he could have recorded “I Want A Hippopotamus For Christmas” and I’d have forgiven him.  Luckily, these two new tracks are a welcome addition to this splendid album.  Cole, Sinatra et al would be proud.

After seeing Murphy on “America’s Got Talent” and hearing his first album, I wasn’t surprised by the quality of his Christmas project.  I WAS surprised to learn of the artist’s commitment to giving back.  A portion of the proceeds from Christmas Made For Two is being donated to the Children’s Home Society Of West Virginia, a non-profit child welfare organization in Murphy’s home state (www.childhswv.org).  A portion of ticket sales from his current Classic Christmas Crooners Tour will benefit the West Virginia Council on Aging.

Murphy told me he performs everything “…from gospel to southern rock…”, and that he’s setting out to rewrite the Great American Songbook.  Like his idols like Cole and Sinatra, he wants to help create a body of music that will have listeners singing and dancing for decades.  It’s a formidable challenge, but if Murphy’s first two releases are indicative of his gift, I’m betting on him.

You can purchase a copy of Christmas Made For Two on iTunes or at www.landaumurphyjr.com.   Also, look for him on Facebook and Twitter.

Look for The Hub’s exclusive conversation with Landau Eugene Murphy, Jr. on www.sacculturalhub.com.