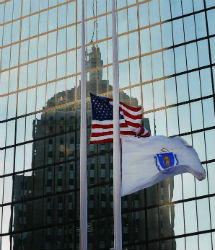 Investigators in Boston are currently searching for clues following the explosion of two bombs at the finish line of the Boston Marathon yesterday, killing three people and injuring more than 100, according to an article on ChicagoTribune.com.

According to the article, police had closed a portion of Boylston Street in Boston, as well as some surrounding blocks, as authorities searched for evidence of the identity of those involved in the bombing.