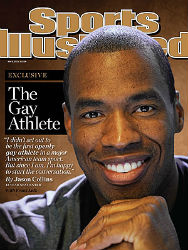 Washington Wizards’ center Jason Collins is the first openly gay athlete playing on a major American sports team, according to an article on People.com.

Collins, 34, reportedly came out as gay during an interview with Sports Illustrated, which can be found in their May 6, 2013 issue.

According to the article, Collins has played for six pro teams and has appeared in two NBA Finals during his career.