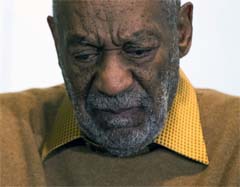 Bill Cosby was asked on NPR’s Weekend Edition Saturday whether he had anything to say about the resurgence of allegations that he sexually assaulted multiple women years ago. He didn’t. Instead, he shook his head, and refused to say a word.

It seemed as though the interview might have broached a subject that hadn’t been agreed to beforehand, given that the story was originally about the art collection. “I’m in the news business,” Simon explained. “I have to ask the question. Do you have any response to those charges?”

Again, Simon informed listeners that Cosby was shaking his head no.