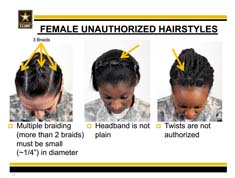 The Army opened a can of worms 10 days ago when it published new rules on allowable hairstyles that, among other things, banned dreadlocks and restricted cornrows. Black female soldiers have objected, arguing that the rules are discriminatory, leaving black soldiers with natural, untreated hair few grooming options. The women of the Congressional Black Caucus joined the fray Thursday, sending  a letter, signed by CBC Chairwoman Marcia Fudge, D-Ohio, and the 15 other female members of the caucus, to Secretary of Defense Chuck Hagel urging him to reconsider the new rules.

A petition on the White House “We the People” website calling for revisions to the rules has more than 15,000 signatures.

To read the letter from the CBC, and the complete article, go to: http://onpolitics.usatoday.com/2014/04/11/black-lawmakers-push-pentagon-on-hair-policy/