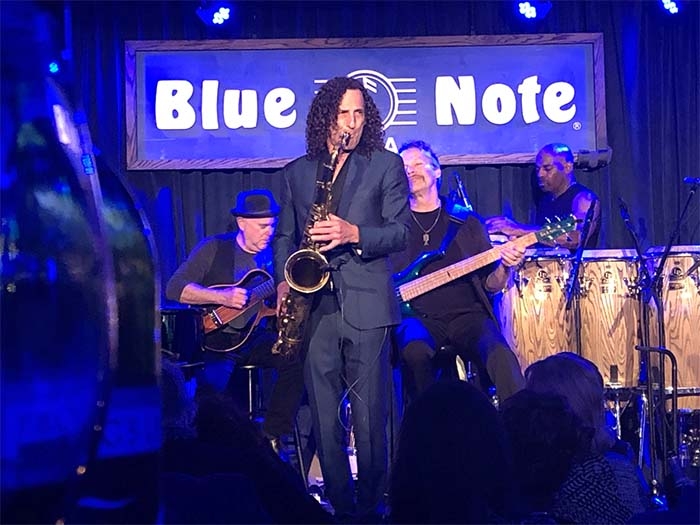 Jazz legend Kenny G has a killer album cut on his 1992 multi-platinum Breathless album entitled “A Year Ago.”

A year ago, who could have imagined that we’d still be weathering COVID-19.

With the CDC’s recently issued green light on travel for the full vaccinated, and with several vaccines being rolled out this spring, fans of live music can finally see a light at the end of a tunnel that has been a lot longer than any of us could have imagined…a year ago.

While fans of great live music wait for indoor venues to fully reopen, Blue Note Napa is shifting their stage outside with a series of fantastic shows.

And if that’s not enough to get you vaccinated and your heart pumping, Kenny G is doing six concerts July 9-11.

If I were Kenny, I’d open the performances up with “A Year Ago,” ‘cause it’s been a long one!

Then again, the best selling instrumental artist of all time has done pretty well for himself for the last four decades, putting shows together without my input, so maybe I should stay in my lane!

“We’re very excited! It’s gonna feel like opening up a box and getting a present that you’ve been waiting to get for so long,” the 64-year-old phenomenon EXCLUSIVELY told me, of his and his band’s upcoming stint at Blue Note Napa. “We’re experiencing a new sense of appreciation for the fact that we’re able to play gigs and have this kind of life. I’ve never been off of the road for this long in 40 years.”

“I’m gonna have a newfound appreciation for every show, for doing something that I’ve loved for so long,” Kenny G continued. “I’m gonna try to make it last, to try to remember this feeling.’

‘And I love that we’re doing our first gig outdoors in Napa! It couldn’t be nicer.”

Just like the rest of us, Kenny says he’s been largely inside, avoiding crowds and keeping himself and his family and loved ones safe during the last year. In addition to his daily practicing, he’s been putting the finishing touches on a new album, New Standards, that he says he’ll release after venues are fully open again and he can tour to promote it. Several times during our talk, Kenny mentioned how much he misses connecting with his fans on the road.

But just like he has done during live performances for over four decades, Kenny has gone with the flow over the last year, and found a way to connect with his audience.

“As a jazz musician, I live a life of improvisation,” Kenny said. “The pandemic happening just meant that it was time to improvise and do what’s going to work with the situation. For the last five months, I’ve been doing Cameos, and I think it’s really going to take off.”

For those unfamiliar with the site, Cameo offers fans a chance to get personalized videos with the star of their choice.

“I’ve been doing some really, really fun Cameos for graduations and new babies — even someone’s 80th birthday,” Kenny said, with a contagious zeal. “One person wanted me to celebrate them becoming a US citizen. That’s been really fun. It keeps me connected, and that’s one of the things that I love about music: it connects people.”

Connection. It’s actually a much more accurate word to use to describe one of Kenny G’s concerts. The man is a master showman who plays the sax like no other while making everyone in the audience feel like we’re a part of the show and of his family. One of the last shows I attended before the world blew up was Kenny G’s New Years Eve concert in 2019, also at Blue Note Napa. It was one of the most memorable New Year’s Eves of my life, and one of the best concerts I’ve ever attended.

If you’ve not experienced Kenny G live, you don’t know the man and his amazing artistry.

Get to know him — connect with him — in Napa this summer.

Tickets for Kenny G’s July 9-11 shows and all of the Blue Note Napa’s upcoming performances are available at BlueNoteNapa.com.