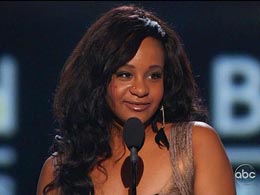 Two days after she was found facedown and unresponsive in a bathtub full of water at her Roswell, Georgia, home, Whitney Houston’s daughter Bobbi Kristina Brown is on a ventilator and in intensive care, a source close to the family said.

Brown, 21, was placed in a medically induced coma and the status of her brain function won’t be known until the sedatives are reduced, the source told CNN.

“Bobbi Kristina is fighting for her life and is surrounded by immediate family. As her father already stated, we are asking you to honor our request for privacy during this difficult time,” the Houston family said, thanking her supporters.

The source close to the family told CNN legal analyst Sunny Hostin that Brown’s eyes opened and closed a few times Monday, but that doctors told family members not to read too much into that movement.

Doctors were trying to reduce the sedatives to check Brown’s brain function, but decided not to and to keep her in the coma for now, the source said.

The source added that Brown had some seizures on Monday.