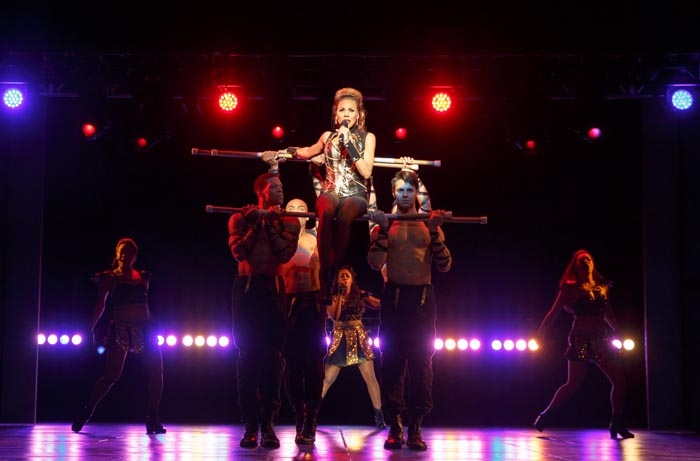 Deborah Cox as Rachel Marron and the company of “The Bodyguard” presented by Broadway Sacramento April 18 – 23, 2017 at the Sacramento Community Center Theater. Photo by Joan Marcus.

I’ve heard that nothing beats a trip to New York City for a great Broadway show.  Thanks to our friends at Broadway Sacramento, we can take in the thrills of Broadway right here in town. This spring, they’re presenting shows that can’t be missed!

The Bodyguard starring Grammy Award-nominee and R&B superstar Deborah Cox rolls in April 18-23.  Based on the hit film with Whitney Houston, the breathtakingly romantic thriller features a host of irresistible classics including “Queen Of The Night,” “So Emotional,” “One Moment In Time,” “Saving All My Love,” “Run To You,” “I Have Nothing,” “I Wanna Dance With Somebody,” and one of the biggest selling songs of all time, “I Will Always Love You.”

“Live performance is really where I live and love, honestly,” Cox exclusively told THE HUB by phone.  “With live theatre, there’s something really magical that happens.  The adrenaline from being on stage, and having the audience there as potentially another character — it’s amazing.”

“This show tells a story about how this girl is in love, and it goes through a very…well I won’t give it away!” Cox enthused.  “The audience sees the story unfold in front of their eyes, and we break the fourth wall a lot, so people in the audience in every city are just freaking out and really enjoying it.  The response to the show from fans all over the country has really taken us by surprise.”

Right after The Bodyguard’s run, Broadway Sacramento brings us Cameron Mackintosh’s spectacular new production of Andrew Lloyd Webber’s The Phantom of the Opera.  Critics are raving that this breathtaking production is “bigger and better than ever before”and “glitters with new sets, sounds, lighting and even pyrotechnics.”

Later in the year, we can look forward to productions of Disney’s Beauty and the Beast, 9 to 5: The Musical, and Sister Act.

Look for THE HUB’s feature on The Bodyguard, including our EXCLUSIVE interview with Deborah Cox, next week at sacculturalhub.com.

Information on all of Broadway Sacramento’s shows is at broadwaysacramento.com

Michael P Coleman is a Sacramento-based freelance writer.  Connect with him at michaelpcoleman.com or on Twitter: @ColemanMichaelP