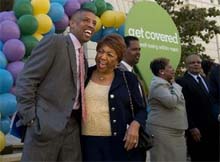 By Christopher Cadelago
California’s health insurance exchange needs a new home. And officials with Covered California, headquartered at 560 J Street in Sacramento, are on the hunt, a spokesman confirmed Wednesday. That’s because its offices at Downtown Plaza are sitting on some important real estate: the presumed future home of the Sacramento Kings.
City and team officials have been working to clear the way for an arena. Last night, the Sacramento City Council moved to file eminent domain proceedings against a group that owns the former Macy’s furniture and men’s store in the mall.
Roy Kennedy, a spokesman for Covered California, said the exchange’s facilities management team is in the process of securing a long-term location. | Read the complete article at the Sacramento Bee