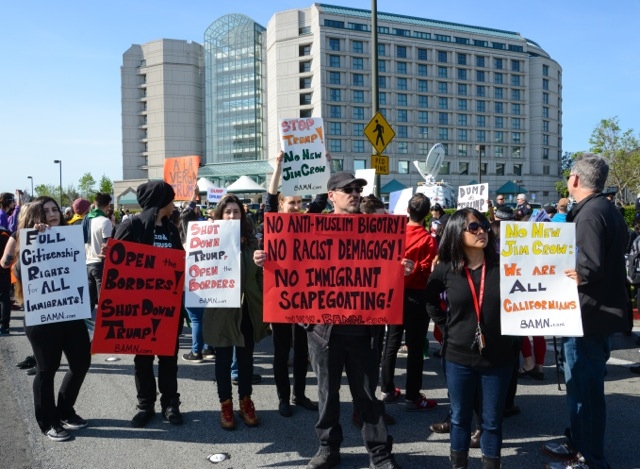 With the California Presidential Primaries approaching in June, supporters and protestors of Republican front-runner Donald Trump gathered over the weekend in Northern California to voice their opinion on Trump’s statements, policies, business-acumen and the New York real estate giant himself.

The business tycoon kicked-off the three-day Republican Convention on April 29 at the Hyatt Regency in Burlingame, 16 miles south of San Francisco to a crowd of 600 advocates for a $100 a plate luncheon.

Supporters cheered and greeted the mogul with enthusiasm and hope. Attorney Chet McGensy from San Francisco was the sole African-American supporter among the attendees.

“I believe that the African-American community is in a terrible state right now in the country, so we have to be able to look at opportunities in terms of rectifying those issues,” McGensy said. “When you look at tons of other issues, health issues, crime issues and everything else, it really stems from creating economical empowerment to influence all those other areas. I believe that Mr. Trump is really focused on those issues and that’s why I’m really interested in supporting him.”

Trump reiterated his plans of making America great again by bringing back the jobs to the U.S., having better trade agreements, and building a 1,000-foot wall along the border of Mexico.

The television personality has been leading in the primaries and said he’s looking forward to being the party’s nominee to become the next president of the United States.

“When I can focus on Hillary, as I say, ‘Crooked Hillary,’ she’ll go down easier than any of the people we just beat,” Trump said.

He said the road to presidency is far more challenging for republicans than democrats and the need for unity to exist among conservatives is critical.

Republicans are widely known as the party of President Abraham Lincoln. Historically the party of the Emancipation attracted the majority of black voters and politicians.

Fifty years ago African-American voters began to migrate away from the GOP. Democratic Presidents John F. Kennedy and Lyndon B. Johnson ended segregation, captivating more black voters. Concurrently, then senator from Arizona and the Republican Party’s nominee for president, Barry Goldwater, believed the Civil Rights Act was unconstitutional. His statements attracted many white voters in the south paving the way for the Southern Strategy used by Presidents Richard Nixon and Ronald Reagan.

With the majority of black voters today identifying with the Democratic Party, Trump is adamant in attracting the African American votes. In Myrtle Beach South Carolina a day before Dr. Martin Luther King Day, Trump said he would create more opportunities for African Americans in a year than President Obama has in nearly eight years.

Hundreds of protestors rallied outside of the convention during Trump’s speech. Activists with Black Lives Matter, Code Pink, and democratic nominee supporters were demonstrating with every intent to stop him from entering the hotel.

Minutes after Trump left the convention without taking any questions from the media, picketers were able to get past the plethora of police officers guarding the entrance to the hotel and unfurl a banner from inside the hotel, “stop hate.”

Protestor Odalis De La O Cortez of Hayward said she is appalled by the amount of hatred that’s being projected by Trump.

“I’m here not so much to hate, but I feel more bad for his supporters because they’re planted with all this hatred,” the first generation college student said. “Nobody is born hating somebody else. They’re taught it.”

The remainder of the GOP convention remained peaceful during the speeches of the other two Republicans vying for the nation’s top political position – Gov. John Kasich of Ohio and Texas Sen. Ted Cruz. The two nominees had a group of supporters who stood by their policies.

With Trump as the front-runner, Cruz voiced California’s vital role for the future of the Republican Party.