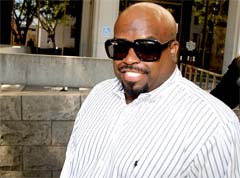 CeeLo Green pleaded no contest Friday to one felony count of furnishing ecstasy to a female in 2012.

Two days later, he reportedly tweeted (and deleted) some controversial comments pertaining to the 2012 incident—specifically what defines rape vs. consent. The same Sunday, the 39-year-old “F–k You” singer (real name: Thomas DeCarlo Callaway) went on to delete his entire Twitter page.

So what exactly did he tweet?  Read the tweets and the entire article at EOnline.com.