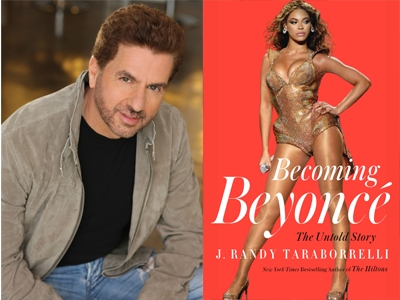 Beyoncé.
For some, her first name alone evokes an image.  A rhythm.  A movement.
For others, it evokes a painstakingly crafted veneer that has rarely been pulled away.  Until recently, fans had to rely on tabloid tales if they wanted a peak behind the diva’s carefully-crafted, controlled curtain.
New York Times bestselling author J. Randy Taraborrelli furiously rips the curtain off of the rod and flings it to the floor.  It’s a comprehensive account of just how a little girl from Houston becomes BEYONCÉ — and the cast of strong, powerful women who helped her along the way (and whose stories have never been told).
“She so high profile in social media,” Taraborrelli told me by phone.  “She’s always in the headlines.  She’s a major star that appears to be constantly in our faces.  But if you unpack what we knew about her before this book, it was practically nothing.  How rare is that these days, that a celebrity can maintain that level of privacy and keep herself in the public eye at the same time?  It’s my job, as a biographer, to invade that privacy.”
In Becoming Beyoncé, Taraborrelli deftly dissects the life of Beyoncé Giselle Knowles Carter and reassembles it bit by sequined bit.  The book exposes the beyond-the-scenes of her guarded marriage to Jay Z, tells the stories of all of the women who mentored and nurtured the superstar long before she emerged as the lead singer of Destiny’s Child, and shares the story of her relationship with her first love, Lyndall Locke.
Click here to read the whole article.
Michael P Coleman is a Sacramento-based freelance writer.  Connect with him at michaelpcoleman.com or on Twitter:  @ColemanMichaelP