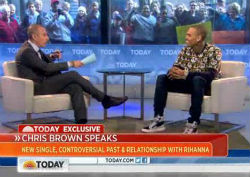 Chris Brown sat down with Matt Lauer of the “Today” show to talk about his new album and his controversial relationship with Rihanna, according to an article on NYDaiyNews.com.

According to the article, Brown opens up about the “new, reformed him” saying he was “humbled” by how he’s been treated over the last three years following his beating Rihanna in 2009.

Brown reportedly claims he’s a “different man” and that he and Rihanna are back as a couple and doing well.