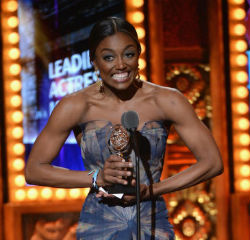 The big honors of the night went to the musical “Kinky Boots,” which took home best musical, best original score, and a slew of other awards.