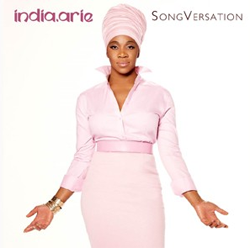 Multi Grammy winning singer/songwriter India.Arie should have placed a warning label on her exceptional new CD, cautioning you not to drive your car while listening to it. If you do, you just might have to pull the car over and start shouting.

“SongVersation – Deluxe Edition (Soulbird/Motown) offers a seamless fusion of a variety of world music inﬂuences, wrapping up her uplifting lyrics. The CD includes a few of the urban radio-friendly songs that we have come to expect from her, including the ﬁrst single “Cocoa Butter”, “Moved By You”, and the infectious “Brotherʼs Keeper”.

Surprises include her collaboration with reggae star Gramps Morgan “Thy Will Be Done” , “Thank You” ʻs tribute to military families, and the apparent ode to New York, “6th Avenue”, that takes a lyrical right turn with the chorus, creating a brilliantly unforgettable hook. Also, the pop radio-friendly, motivational “Just Do You” would be very well served by a great dance mix, and “This Love” could become a new live performance anthem for the singer.

However, Arieʼs true gift is spiritual ministry, and she practically preaches on the exceptional, hymn-like “I Am Light”, the middle eastern-tinged “One”, “Life I Know”, and “Break The Shell”. She performed the latter recently on OWNʼs “Super Soul Sunday”, bringing the house down and Oprah to tears.

Arieʼs voice has gotten huskier over the last decade, and her new timbre gives added heft to her songs, particularly the spiritual tracks. She always sang with authority, but her expanded lower register more effectively sells her more inspirational songs.

On “I Am Light”, Arie sings “I am not the things my family did…I am not the voices in my head…I am light.” On “Cocoa Butter”, she sings “My heart was bruised, thatʼs what happens when you use it…I show you a blemish, you show me Godʼs not ﬁnished…” This is clearly a woman who has faced more than a few hard times, but has come out victorious on the other side. Grab a copy of “SongVersation” and take the journey with her.

India.Arie is scheduled to perform live at the Warﬁeld Theater in San Francisco on September 24. Tickets are available at Ticketmaster.com. Special VIP packages which include a meet-and-greet with the artist can be purchased at IndiaArie.com.