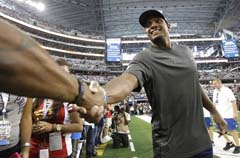 Michael Sam will have to wait for a third team to give the NFL’s first openly gay player a chance to appear in a regular-season game.

The Dallas Cowboys released Sam from the practice squad Tuesday, dropping the rush end as they prepare for several potential reinforcements to return to the defensive line.

Sam spent seven weeks with the Cowboys after joining their practice squad Sept. 3, four days after he was among the final cuts by the St. Louis Rams at the end of the preseason. He was never placed on the 53-man active roster.

Click here to read the complete article at the NewsSentinel.com.