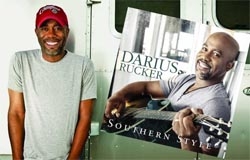 Darius Rucker is celebrating his fourth consecutive No. 1 country album debut with Southern Style topping the Billboard Country albums chart.  Rucker’s first three country albums, True  Believers, Charleston, SC 1966 and Learn To Live all topped the Billboard Country albums chart and the four albums have produced seven No. 1 singles including “Homegrown Honey,” “Come Back Song,” “This,” “Alright,” “It Won’t Be Like This For Long,” “Don’t Think I Don’t Think About It” and the Grammy Award winning “Wagon Wheel.”

“Making a country album has been a dream of mine for as long as I can remember,” shares Rucker.  “Being able to write and record four country albums over the last seven years and have them all debut at No. 1 is beyond any of my wildest dreams. I am so excited to get on the road this spring to share this music with my fans.”

For the complete article, visit The Country Outfitter.