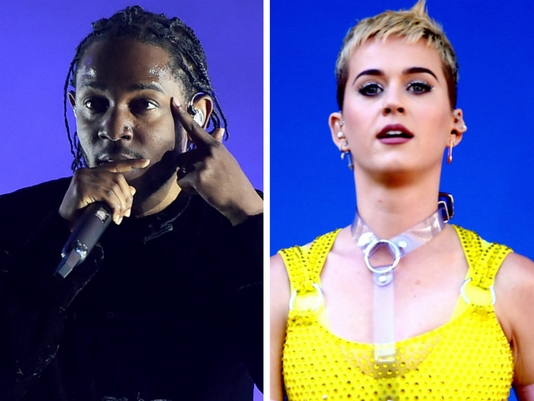 What does protest music sound like in the age of Trump? Today’s biggest pop stars have some ideas.

And fans are responding, sending two politically-charged rap albums to No. 1 on the Billboard album charts in the past two months.

Hip hop’s political conscience is nothing new, with protest ingrained in the storytelling of Public Enemy, N.W.A and the genre’s other forefathers from the ’80s and ’90s. With the rise of 2015’s Black Lives Matter movement came Beyonce’s incendiary Formation visuals, the rise of Killer Mike and El-P’s fiery rap project Run the Jewels, J. Cole’s Michael Brown remembrance Be Free and the movement’s unofficial anthem, Kendrick Lamar’s Alright.

Lamar’s chart-topping April release DAMN. is 2017’s best-selling release so far, an album that weaves vivid narratives about race and poverty in America before interrogating his own role in Trump’s presidential win. His Fox News-referencing track DNA peaked at No. 4 on the charts, far higher than either of Perry’s new singles, Bon Appetit and Swish, Swish, both of which abandoned her previous calls for political activism.