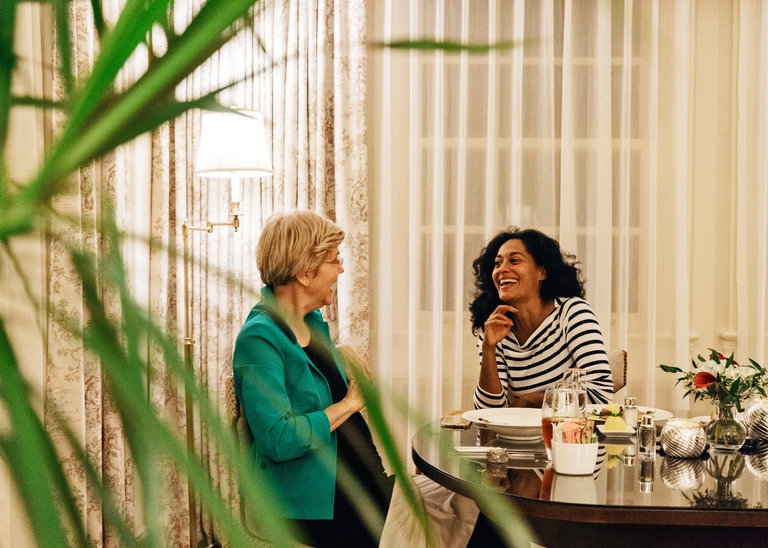 Tracee Ellis Ross may be working 14 hours a day in Los Angeles on her hit TV show, “black-ish.” “But when Elizabeth Warren says she’ll have dinner with you,” Ms. Ross said, walking into a suite at the Hay-Adams Hotel in Washington, “you get on a plane. I have a million questions for her.”

And from the moment Senator Warren entered the lobby, friendly to all but racewalking toward the elevator, she was happy to offer answers: breaking down complex problems into plain-spoken choices, engaging everyone in sight. When a woman on the elevator said, “You look familiar,” Ms. Warren introduced herself, shook her hand and asked how her evening was going.

Of course, Ms. Warren, 67, comes by teaching naturally. A law professor for over 30 years, most recently at Harvard, she specialized in bankruptcy and commercial law. A strong advocate of consumer protection, she conceived and fought for the Consumer Financial Protection Bureau under the Dodd-Frank Act of 2010.

Two years later, the political novice was elected a United States senator from Massachusetts. Ms. Warren has since emerged as a very popular figure in the Democratic Party and a fierce advocate for the middle class. In June, she endorsed Hillary Clinton for president, and has gone toe-to-toe with Donald J. Trump in a series of fiery Twitter exchanges.

Ms. Ross, 43, has also established herself as a powerful advocate, particularly for self-esteem among black girls in a series of TV specials, “Black Girls Rock,” and through social media. For eight seasons, beginning in 2000, she starred in the sitcom “Girlfriends,” for which she won two NAACP Image Awards.

But her greatest exposure and acclaim have come with her starring role on “black-ish,” about an extended African-American family, whose third season begins on Wednesday. For her performance, Ms. Ross was nominated for an Emmy for lead actress in a comedy. She is the first African-American woman to be nominated in the category in 30 years, and only the fifth in Emmy history. (The Emmys will be televised Sunday.)

Over dinner at the Hay-Adams last week, at a table overlooking the White House, a beet salad and risotto for Ms. Warren and a green salad and arctic char for Ms. Ross, the women spoke freely on a range of subjects: the coming election, their family dynamics and a plan for engaging discouraged fellow citizens.

For the complete story, visit TheNewYorkTimes.com/FashionandStyle.