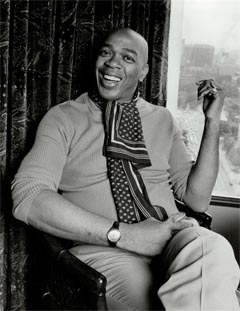 Geoffrey Holder, the dancer, choreographer, actor, composer, designer and painter who used his manifold talents to infuse the arts with the flavor of his native West Indies and to put a singular stamp on the American cultural scene, not least with his outsize personality, died on Sunday in Manhattan. He was 84.

Charles M. Mirotznik, a spokesman for the family, said the cause was complications of pneumonia.

Few cultural figures of the last half of the 20th century were as multifaceted as Mr. Holder, and few had a public presence as unmistakable as his, with his gleaming pate atop a 6-foot-6 frame, full-bodied laugh and bassoon of a voice laced with the lilting cadences of the Caribbean.

Click here for the complete article at The New York Times.