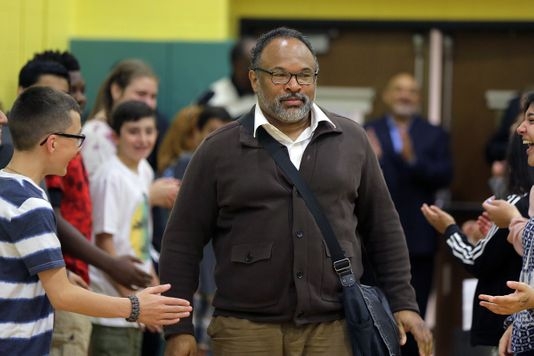 Actor Geoffrey Owens, who once played Bill Cosby’s son-in-law Elvin on “The Cosby Show,” says he is proud to work at Trader Joe’s and is unfazed by what he feels is job-shaming.

Wearing his red store badge and smiling, the 57-year-old actor whom outlets spotted working at the supermarket in Clifton, New Jersey, appeared on Tuesday’s “Good Morning America.” During a conversation with “GMA” anchor Robin Roberts, he reflected on the outpouring of support he’s received from celebrities like Terry Crews, Blair Underwood and Pamela Adlon.

“It’s really overwhelming in a good way,” Owens shared with Roberts. “I really want to thank everybody out there: family, friends, Hollywood community and the general public for the incredible support, the amazing support and positivity that they’ve shown for me. It’s quite astounding, it’s very encouraging.”

Owens said he felt the reports about his workplace were in fact attempts at job-shaming.

“I was really devastated, but the period of devastation was so short, because so shortly after that, the responses – my wife and I started to read these responses from literally all over the world of support and so, fortunately, the shame part didn’t last very long,” he said.