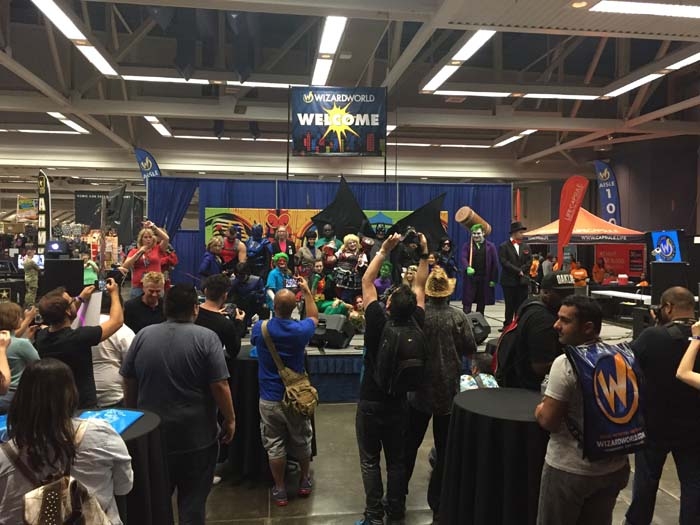 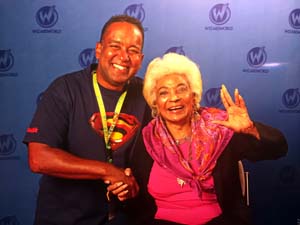 And yes, I am one of those geeks.

I met Nichelle Nichols, the actress who originated the role of “Lt. Uhura” on Star Trek! She’s as warm and beautiful, at 83 years old, as you’d hope.  And she gave me a hard time because I can’t do the “live long and prosper” hand thing.  Never could.  I got a sense that no one had ever told her that!  I have loved her since I was a kid.

As always, there are a multitude of artists, artisans, and vendors at Comic Con. 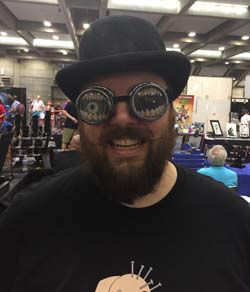 One of them, Octopunx, was selling the funkiest sets of goggles I’ve ever seen! Just talking to the couple while they were wearing the specs at their booth made me laugh out loud.  Order online at octopus.etsy.com

Another offered very cool custom-made frames for your collectibles.  They’re hard to describe, but check them out at popdisplayframesinc.com before visiting their booth.

But I have to tell you, in terms of inanimate object highlights, the Batmobile took the cake. Yes, THE Batmobile from the classic 1960s television series Batman is there.  And you can enter into a drawing to win a ride in it! 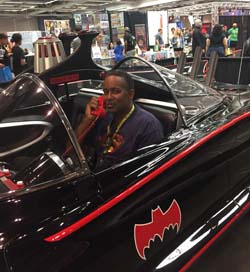 I’m a lifetime Superman fanatic, but I had to enter the drawing!  The red Batphone in the car lights up and is Bluetooth compatible, so when someone called my number, the phone lit up and beeped and.. my head almost exploded.  I couldn’t believe I was sitting in THAT CAR!

You can, too — but only through Sunday at this year’s Comic Con in Sacramento.

Click here for information on this year’s Wizard World Comic Con in Sacramento.