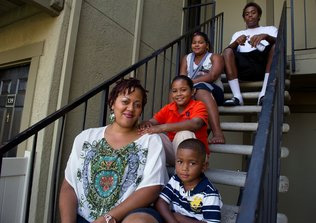 Their homes are gone, their credit is shot and their rent is often more expensive than a mortgage payment.

The housing bust affected people of all races, but it hit the region’s black and Latino populations hardest of all, causing minority homeownership rates to fall to their lowest level in decades, new Census 2010 data show.

About 36 percent of the region’s blacks own their homes, down from 40 percent in 2000. For Latinos, the homeownership rate dropped from 49 percent to 47 percent during that time.

[Photo by Randy Pench – Kali Cuffee and children, from bottom, Cyrus, 3, Grace, 7, Faith, 10, and De’Maurier, 18, sit outside their south Sacramento apartment. The family used to live in a nearby four-bedroom home Cuffee bought in 2003. But the recession hit both her hairstyling business and the home’s value. And the bank took it back. “I have faith that one day I’ll be able to put my children back in a home again,” she said.]

By contrast, the homeownership rate for whites – 67 percent – and Asians – 62 percent – rose during the last 10 years.

All races saw homeownership rates increase during the housing boom of 2001 to 2006, as home values roughly doubled. The difference is that in the subsequent bust, whites and Asians merely lost most of what they had gained. Blacks and Latinos lost all their gains – and more.

That’s because blacks and Latinos were far more likely to take out subprime loans during the boom. The loans, which typically featured low initial interest rates that skyrocketed after a few years, consistently led to foreclosures.

Many blacks and Latinos took those loans because it was all they could afford, and they wanted in on the housing boom at any price, several real estate experts said. Traditional, safer loans required lots of cash upfront.

Half a dozen experts interviewed, though, said lenders and mortgage brokers in some cases targeted blacks and Latinos for subprime loans, hoping to make money off higher interest rates and lending fees. As evidence, they pointed to studies showing that lenders often sold subprime loans to blacks and Latinos who qualified for cheaper traditional loans. >>read more