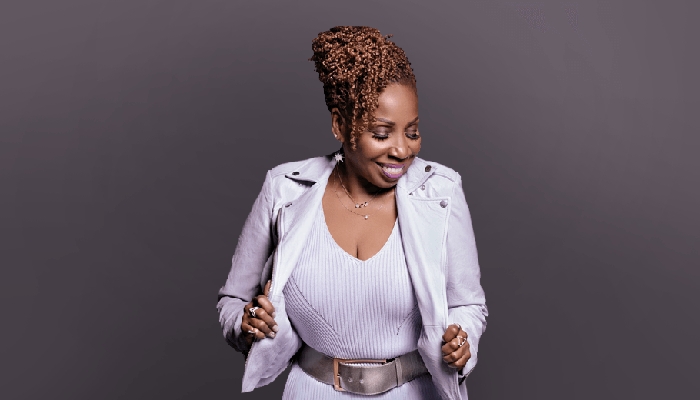 If you’re ready to do your work, receive some straight-between-the-eyes advice, learn to put ego aside, and strengthen that faith muscle of yours, New York Times best selling author Iyanla Vanzant is ready to help you.  The Emmy Award-winner has just launched her 30 city An Evening With Iyanla Vanzant: Acts Of Faith Remix Tour, with stops in Stockton and Oakland on May 31 and June 1, respectively.

With her Acts Of Faith having just been reissued in a 25th anniversary edition, the celebrated spiritual teacher and tell-it-like-it-is life couch is eager to get in front of some of her most fervent fans with an update on the best-seller.

It took every fiber of my being to keep from going into the ugly cry as Vanzant and I chatted, hours before the tour’s Phoenix kick off.  During our talk, the legend reminded me that quite a lot has changed since Act Of Faith’s initial publication.

“25 years ago, when the book came out, we had never seen an African American in the White House,” Vanzant, 65, EXCLUSIVELY said by phone.  “Women were fighting for rights that they now have and they take for granted, and men could get away with all manor of bad behavior and no one would challenge them.”

“When the book came out, people weren’t talking about spirituality outside of the church. They weren’t talking about personal growth and personal development,” Vanzant continued.  “In Acts Of Faith, I quote everybody from John F. Kennedy to the Dalai Lama.  We left the original text intact, but we added a daily reflection because now we have to reflect, which means look back on our lives and ourselves and our relationships, and apply what we know.”

“25 years ago, we were passive learners, but today, with everything going on in the world, we’ve got to be active, and faith is a part of being an active learner.”

Over the phone, the charismatic Vanzant exuded every iota of the trademark warmth and zeal that made her an international sensation over 30 years ago, first on Oprah Winfrey’s groundbreaking daytime talk show.  After just a few minutes together, I couldn’t decide whether Vanzant was the girl next door or a fiery minister, showing us the way.

Vanzant asserts that with the state of the world today, faith is more important than ever.

“Faith is putting your trust in the unseen and challenging your soul to go beyond what your eyes recognize,” Vanzant preached. “The outcome of where we are right now is unseen. We have to challenge ourselves each and every day to go beyond what we think and what the world is telling us. The only thing that’s going to get us through that is faith.”

Vanzant and I talked about the difficulty some have with faith outside of organized religion.

“Trust gives birth to faith,” Vanzant taught. “So many people will tell you with their two lips ‘I can’t trust nobody’ or ‘I have a hard time trusting.’ All of the good books, whether you’re talking the Bible or the Quran or some of the more sacred texts that have come forward, like The Course Of Miracles or The Way Of Mastery, say something in common: scripture tells us to trust in the Creator, in the Lord with all thy heart. Trust! It’s an internal experience. It’s what you do inside yourself, based on your knowing, your belief, your conscious and your sub-conscious mind. Trust IN.”

“Those same scriptures tell us ‘faith without works…’. So faith is external. What you do outside is going to be a reflection of what you think, feel, know, believe inside.”

“The reason people have a difficulty with faith is because they don’t trust,” Vanzant added. “Listen: if you have a hard time trusting, you’re gonna have a faith crisis!”

A faith crisis.  In textbook fashion, Vanzant called a thing a thing (as she likes to say) and named a moment of indecision and doubt that we’ve all faced.   And just as true to form, Vanzant showed us the way out — by giving us a peek into her own faith journey.

“I had a crisis of faith this morning,” Vanzant confided, “and you know I’m going to tell the people in Modesto and Oakland about it!  In the 36 years that I’ve been doing this work publicly, I have never stepped onstage with a written script.  Never!  But sometimes we just have these lapses of sanity, and I decided I was going to write everything out that I have to say, to put it all on a piece of paper.  Then, I lost the paper and I couldn’t remember what was on the paper!”

“So I did the one thing that people forget to do when they’re having a crisis of faith,” Vanzant continued. “I started praying. I said ‘Holy Spirit, help me.  Help me remember.’ And what I heard as clear as day was ‘Why? Why do you have to remember? You don’t know who’s going to be in the room each night, but I do.  Put your faith in Me.’ Lord, have mercy!”

Sounds like it’s time for a quick shower, to put on our Sunday best, and to brace ourselves for the arrival of a spiritual force, the incomparable Iyanla Vanzant!

Click here for information on A Evening With Iyanla Vanzant: Acts Of Faith Remix Tour.