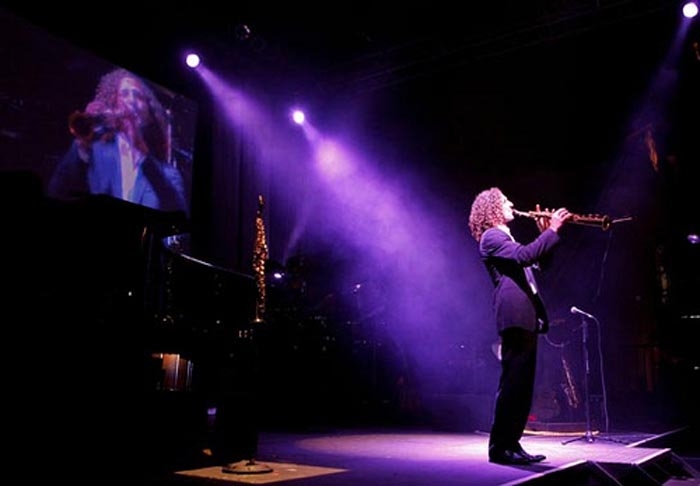 If you think jazz great Kenny G has got a night of lazy ballads in store for this Thursday night’s concert in Modesto, he’s got news for you.

That’s not to say that fans won’t hear languid hits like “Forever In Love,” “Don’t Make Me Wait For Love,” or “Songbird,” but to use a little vernacular from back in the day, when performing in front of an audience, Kenny kicks it.

“We have a ton of rhythm in the concert and a lot of up tempo stuff,” Kenny G, 62, told me by phone, during a break in recording his upcoming album and just days before he and his band descend on Modesto.

“It’s not all ballads.  We play some ballads, beautiful ones that we do very, very well in concert, but you have to give fans a variety of stuff.  We even dip back down into the 50s and play a couple of old jazz standards.  When we play them, fans [tell us they] love the fact that they were introduced to some music that they probably had never heard before.”

One of those uptempo cuts of which Kenny spoke, the funky “G Bop” from his Breathless project, is one of my all time favorite Kenny G songs.  The artist promises to play it early during his set Thursday night, which all but guaranteed I’ll be there!

Kenny says fans of “G Bop” are in for a surprise.

“With my rhythm section, ‘G Bop’ sounds 10 times better live than it ever did on the recording,” Kenny G promised.  “WAY better live!  I listen to the recording and always think we should rerecord it, because with my drummer and percussionist, it doesn’t sound anything like what we do with it live.”

Kenny has been playing to full houses during his current tour, which is rewarding for an artist who has spent decades devoting so much of himself — time, thought, and energy — into every single show.  That’s not PR hype: Kenny G is up at night, sometimes, thinking of ways he can make every show memorable.

If the September 27 concert is already sold out by the time you click here, I’ll let you know if Kenny G achieved that goal.  But listening to his brilliantly etherial CDs, I have a feeling he will.