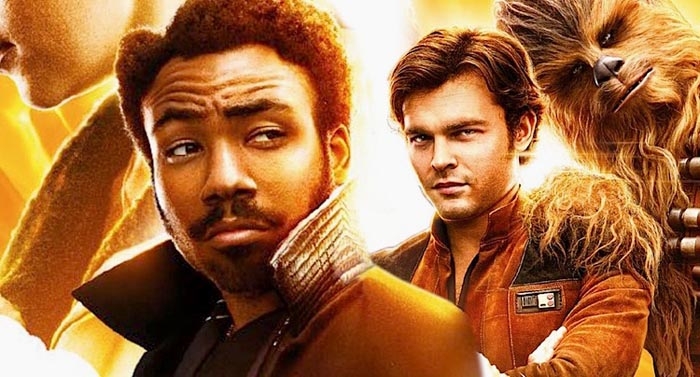 I carried a healthy dose of trepidation with me to see the latest Star Wars movie.  My world — well, the way I viewed science fiction movies, at least — changed when Lando Calrissian first showed up in The Empire Strikes Back back in 1980.  Prior to that, with the exception of Lt. Uhura in the original Star Trek — space may have been the final frontier, but it was decidedly and unapologetically white.  It was great, and very affirming, to see that “A long time ago, in a galaxy far, far away,” there was someone who looked like me.

Most problematically for the new film, Lando was originated brilliantly and unforgettably by the legendary Billy Dee Williams.  I wondered whether Donald Glover could bring Williams’ gravitas, or something approximating it, to Solo.

When I interviewed Williams a few years ago, he told me he thought his legacy was secure.

“I don’t know what they’re doing at this point,” Williams told me during our EXCLUSIVE interview.  “But listen, I have made my mark with Lando.  If they choose to bring him back, I’d be happy to play him again.  But they’ve decided to take a different direction, at least for this movie.”

Williams was speaking of Star Wars: The Force Awakens, which was in production at the time.  Although Williams’ Lando Calrissian was woefully absent in it, that film went on to be an international blockbuster, paving the way for a slew of Star Wars films, like the current prequel.

Now, as it turns out, Donald Glover does an admirable job in the new Solo: A Star Wars Story.  I’m typically not a fan of prequels. After all, with this one, which introduces us to Calrissian, Chewbacca, and the title character, we already know all three make it out alive and unscathed, so Solo’s action sequences fall a little flat for me.  Glover imbues Calrissian with a sexy swagger that Williams would probably, albeit a little begrudgingly, like and admire.  Glover is so charming and engaging, in fact, that he (and, comically, Chewbacca) expose one of Solo’s critical flaws:

The movie’s star, Alden Ehrenreich, is no Harrison Ford.

Now, maybe, that’s an unfair criticism.  Ford was among the last of the great Hollywood leading men in the tradition of Sidney Poitier, Richard Roundtree, and…Billy Dee Williams!  Ehrenreich is adequate, but not good enough to emerge from the shadow of Harrison Ford’s brilliance.  In The Empire Strikes Back, after Princess Leia told Han she loved him and Ford’s Han Solo replied “I know,” you felt it, and laughed — or at least smirked — right along with him just before he was frozen in carbonite.

I haven’t seen The Empire Strikes Back in years, but I remember than scene like it was yesterday.  I saw the new Solo: A Star Wars Story a few days ago, and I can’t repeat a single line from it.   And that, pretty much, sums it up for me.  Based on the film’s disappointing box office, I don’t think will be a sequel, which is sad for Glover, but probably good for Star Wars fans.

Now, where’s my Blu Ray to Return Of The Jedi?  I need to remember how ol’ Han got outta that carbonite!

Solo:  A Star Wars Story is in theaters everywhere.