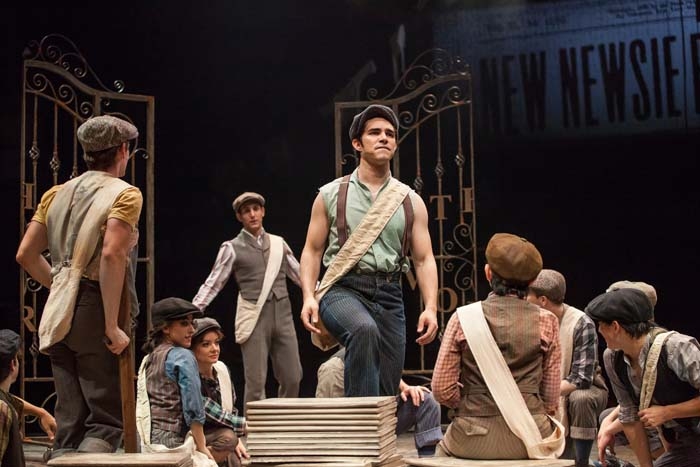 Why’s that important?  It may be hard for you to imagine a world where everyone got their news via a relative relic called a “newspaper.”  That’s the world depicted in the Tony Award-winning Disney’s Newsies, which made its triumphant Broadway At Music Circus debut last night at Sacramento’s Wells Fargo Pavilion.

The show tells the story of a group of New York City newsboys who are faced with an injustice that, frankly, is hard for modern audiences in this country to fathom.  It takes a talented group of actors to turn a small stage with sparse settings into 1899 New York, or to take an audience back to a time of pre-iPhone news cycles, but this gifted cast did it over and over again. 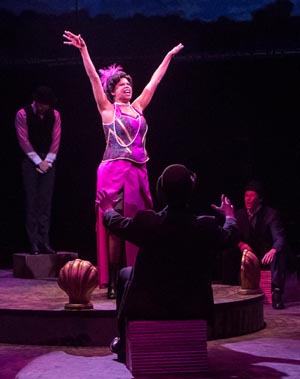 Newsies is based on Disney’s 1992 movie of the same title, which is referred to as a “hit film” in promotional materials for the play.  That’s “spin” at its very best: the $15 million feature film earned just short of $3 million at the box office back in ’92.  I could never quite figure out why the movie didn’t resonate with audiences.  After last night, I have an answer: the original feature film didn’t have Joey Barreiro, who floored last night’s Broadway At Music Circus audience, in it.

If I had to describe Barreiro’s performance in just one word, I’d choose “breathtaking.”  The man is a vocal phenomenon.  Every great musical has a “I want” song, that moment when audiences fall in love with the lead and join them in their quest for their heart’s desire.  No one in my lifetime has written those songs better than musical theater legend Alan Menken, and his “Sante Fe” is among his very best compositions.  Barreiro’s performance of “Sante Fe,” which closes Newsies’ first act, made me want to book a trip there.

Other highlights from last night included performances by Laurie Veldheer singing “Watch What Happens,” an ebullient crowd-pleaser with more lyrics than anyone should have to memorize, and her stirring duet with Barreiro on “Something To Believe In.”  Blake Stadnik’s portrayal of “Crutchie” may have caused me to tear up once or twice.  And based on the audience’s riotous response to Ron Wisniski’s “Governor Roosevelt,” more of him would have been great.

That last comment almost makes me sound like a musical theater professional.  I’m not.  I’m just a guy who tries every day to “Seize The Day,” which was another of last night’s highlights.  If you’ve not done it yet, seize the opportunity to see this joyous show.

Disney’s Newsies runs through Sunday, July 15.  Tickets start at $45 and are available by phone at (916) 557-1999, online at tickets.com, or in person at the Wells Fargo Pavilion Box Office, 1419 H Street in Sacramento.  For more information, visit BroadwaySacramento.com