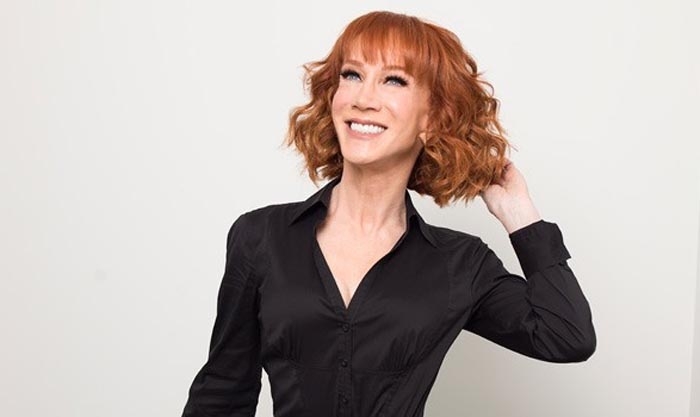 As we filed into the SF Masonic for the sold-out kick off of Kathy Griffin’s hilariously dubbed Laugh Your Head Off World Tour last night, I had a sense we were going to experience greatness.

Well, when you attend a Griffin show, that’s a given.  The woman has always displayed comic brilliance.  But I had a sense that this would be...more.

Griffin told us last night that in the middle of the fallout over the infamous Trump head pic, Jim Carrey called her and encouraged her to get back on that stage.  With a personal Trump story, Carrey said, Griffin was in a position that every comedian in the world would die for.  Thank God she listened.

And the greatness?  The “more?”  They were all there last night, cheering Griffin on.  Her mentor and friend, Joan Rivers. Redd Foxx. Richard Pryor.  Comedians who’d taken life’s curve balls and knocked them out of the park, delivering comedy gold to fans who needed a night of laughs.

I had last seen Griffin live a few years ago, before the photo fallout threatened to deprive fans of the funniest stand-up comedian alive, and a bunch of Trump crazies literally threatened to end her life.

They say what doesn’t kill you makes you stronger.  They’re right:  I have never laughed as hard or as consistently as I did during Griffin’s nearly three hour set.  And those aforementioned death threats provided the material for some of the night’s most hysterical moments.  Yes, she brought the most ridiculous of the letters with her and read them from the stage!

It’s hard to believe that that infamous photo of Griffin holding the faux Trump head was published just over a year ago.  This time last year, critics, some fans, and according to Griffin, most of her Hollywood colleagues and friends had counted her out.  Luckily for us, you can’t keep a good hag down.  The woman is selling out shows all over the country, and giving Trump the finger while she does it.

No one and nothing was off limits during the night, but if you’re a Trump fan, brace yourself.  Griffin announced early on that she was “proudly unhinged,” and she lacerated Trump, as well as former celebrity associates like Anderson Cooper and Andy Cohen, fiercely and often.  Half of Washington and a lot of Hollywood was skewered during the show, as Griffin detailed the mostly hilarious and sometimes painful details of her last year.

The performance was a case study in working a crowd, as Griffin had everyone’s rapt attention from the moment she took the stage — in the same dress she wore in the infamous photo.  She mercurially shifted between her political and pop culture jibes with a stunning fluidity.  Only once did we get a peek behind the clown’s facade, when she choked up at the mention of her sister, who died of cancer last year.  A well-timed “We love you, Kathy” from the balcony, along with one of the many roaring ovations from the audience, was all the legend needed to go on with the show.

If you know anything about Griffin, you know that her performances are for neither the faint of heart nor the whole family.  Get a baby sitter for the little ones and catch Griffin during this tour.  And prepare to laugh your ass off right along with your head.

Details on Griffin’s Laugh Your Head Off Tour are at kathygriffin.net.