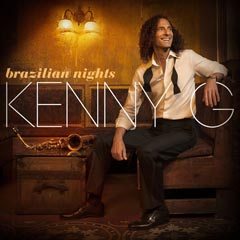 Kenny G has always known how to warm up a cool winter night with that smoking sax of his. True to form, his new album, Brazilian Nights, is hot.

In the spirit of full and total disclosure, I was never one of those purists who claimed that Kenny G’s music wasn’t “real” jazz.  Despite having cut my jazz teeth (along with most other kids my age) with the soundtracks to the Charlie Brown TV specials, Kenny’s G’s music was always more than jazzy enough for me.  I STILL think his Duotones album, featuring the multi-format smash, “Don’t Make Me Wait For Love”, is one of the greatest jazz albums ever released.

Kenny G’s career has endured in part due to his ability to ride whatever wave was dominant in the music industry.  His 80s and early 90s all-star collaborations (Peabo Bryson, Toni Braxton, Babyface) gave way to his dominating holiday music in the late 90s and into the then-new millennium.  G then morphed into other concept albums, like his “duets” project, his “classics” album, and his “greatest romantic songs of all time” disc.  Kenny even recorded an earlier album of latin-influenced music, 2008’s excellent Rhythm & Romance.

This walks us right up to the new Brazilian Nights. With latin music hotter than ever in the United States, Kenny G scores with an album filled with covers like “Corcovado” and “Girl From Ipanema”, laced with original scorchers like the first single, “Bossa Réal”, “Bu Bossa”, and the disc’s title track.  Another of the album’s original cuts, “Summer Love”, is a bit of throwback to Kenny G of old.  I wouldn’t be at all surprised if he released it as the album’s next single.

G says he has had this music in him for years.

“I’ve been in love with bossa nova my whole life,” he says.  “My goal was not only to make a bossa nova album that pays tribute to the “masters” who I’ve been listening to (Cannonball Adderley, Paul Desmond and Stan Getz) but also to write and record original bossa novas that I hope can ‘hold their own’ in this distinguished company.”

He succeeds.  Masterfully.  Kenny G’s originals are indistinguishable from the classics on this disc.  And after over 30 years in the biz, it’s great to hear him clearly having so much fun on this album.

Kenny G‘s Brazilian Nights is available at iTunes and retail.

Michael P. Coleman is a Sacramento-based freelance writer.  Catch up to him at michaelpcoleman.com, via email at mikelsmindseye@me.com, or on Twitter: @ColemanMichaelP.