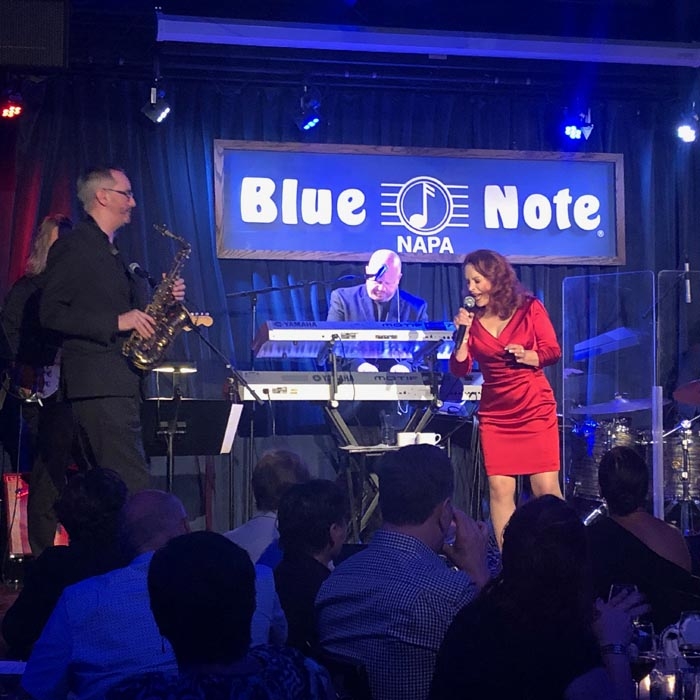 Just before the last of the legendary Sheena Easton’s four concerts last weekend at the Blue Note in Napa, her drummer gave me a hint of what was to come.

“Sheena likes the funk,” Earl Campbell whispered in my ear.

Minutes later, Scotland’s greatest musical export blazed into the stage in a form-fitting red dress that was as hot as her vocals were throughout the show, tearing into a cover of The Emotions’ “Best Of My Love.”

From there, Easton launched into a smash of her own, the energetic “Strut” before slowing things down with another of her hits, the lovely “Almost Over You.”

It was during that song that I realized how well Easton, who easily looked a decade or so younger than her 60 years, has taken care of her octave-leaping voice.  While any savvy chanteuse can hide vocal imperfections behind a groove, a slow burner like “Almost Over You” requires a great set of pipes and a pair of healthy lungs.  After almost 40 years on stage, Easton let us know right up front that she’s still got both.

A Dionne Warwick cover, “Always Something There To Remind Me,” and a selection from Easton’s highly underrated No Strings collection, “How Deep Is The Ocean” followed, before the legend spoke of her friendship and professional relationship with Prince.  Easton then launched into a raucous medley of their duet “U Got The Look” and her own searing “Sugar Walls,” before reincarnating Sheila E’s “The Glamorous Life.”

After that, Easton said “I want to get romantic now with another great collaboration I had” before launching into her hit duet with Kenny Rogers, “We’ve Got Tonight.”  As with the Prince duet, she performed that one with one of her background singers, Brandon Nix.  Very simply put, they sounded incredible together.  The lady then switched it up again, saying “I think it’s time to get some funk again” between sips of tea before barreling into “The Lover In Me,” one of her collaborations with LA Reid & Babyface.

Easton and her tight band then launched into a Motown tribute, after talking to the transfixed crowd about the impact that the legendary label had on generations of musicians.  Faithful covers of The Temptations “Ain’t Too Proud To Beg,” Jackie Wilson’s “(Your Love Keeps Lifting Me) Higher & Higher,” and her own hit, “Telephone” followed, before Easton gave the crowd the one that everyone wanted to hear, her own #1 hit “Morning Train.”

Easton ended the show with one of the best-sung pop songs of the last 50 years, “For Your Eyes Only” from 1983.   Incredibly, the lady hit every soaring note — 36 years later.  She even held that final note as long as she did at the end of the record, and while she was out of breath after that, we were all left breathless, too — for entirely different reasons.  What a talent.

As good as Easton sounded, my only disappointment was that she didn’t sing a couple more of those ballads that we all love, like “When He Shines” or “I Wouldn’t Beg For Water.”  But to do so, she might have had to drop one of those “funk” songs she loves so much, and I wouldn’t have had that for a minute.

Easton likes to do one or two shows a month, “somewhere in the world” she says. If she’s in your corner of that world anytime soon, and you’re up for a nostalgic, very well-sung concert, check her out.

If you’re an Apple Music subscriber, check out their introductory Sheena Easton Essentials playlist.  It’ll get you started, but it just scratches Sheena’s surface!