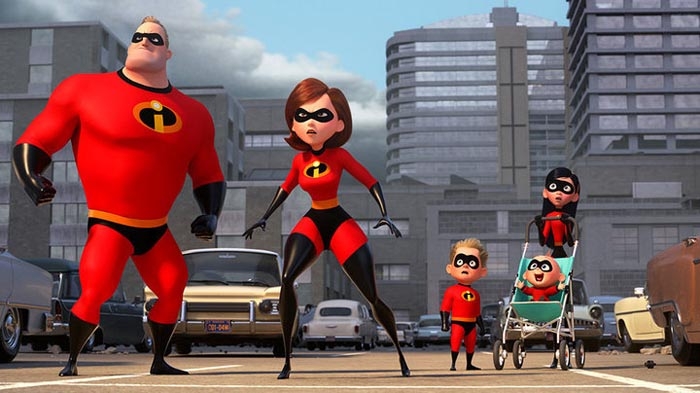 Fourteen years is a long time to wait for a sequel, especially for an animated, family-oriented film.  The children who helped make 2004’s The Incredibles a theatrical sensation are adults today, and their kids probably have smart phones glued to their hands.  After so many years, support for the new, long-awaited sequel was far from a given.

There’s a cute preview ahead of The Incredibles 2 featuring some of the voice talent behind the animated characters, including Samuel L. Jackson, Holly Hunter, and Craig T. Nelson, thanking fans for their patience.  It suggests that execs with Disney and Pixar, the studios behind the franchise, were more than a little anxious about how the sequel would be received after all of these years.

They needn’t have worried.  The Incredibles 2 is every bit as fun as its predecessor, and quite possibly more so.

Audiences seem to agree.  Having opened last Friday, The Incredibles 2 blew past projections and raked in a whopping $180 million at the North American box office during its opening weekend.  It’s a record for an animated film and for a PG-rated, family-oriented movie.  And it pulled in another $50+ million overseas.

The Incredibles 2 boasts an almost two hour run time, but time flies when you’re having fun, and I hadn’t had this much fun watching a superhero movie since last year’s Wonder Woman.  Like that movie, this one’s got a strong message for the #TimesUp crowd, with Elastigirl taking center stage this time around.  And remember the kids I mentioned with the cell phones in their hands?  There’s a not-so-hidden message in this film for them and for parents battling similar technology addictions.

There was one completely unexpected joy in watching The Incredibles 2:  the film’s zippy soundtrack, featuring an original score by Michael Giacchino.  Sounding like a mashup of scores from classic superhero and James Bond movies, the soundtrack elicited smiles — and a few chuckles — all by itself as I streamed it after returning home after the show.

Unlike other superhero franchises who are undoubtedly pressured to make sequels quickly before their stars age out of the spandex, The Incredibles’ animated medium supports many more years of Mr. Incredible, Elastigirl, Edna, Frozone, and the kids — and with Jack-Jack’s big reveals, I want to see more of all of them.   This joyous sequel ends just as it should, teeing up the inevitable next chapter.  With The Incredibles 2’s record-shattering box office, a third installment is all but a given.  Here’s hoping we don’t have to wait another 14 years.

And here’s hoping Marvel and DC are taking notice:  THIS is how you make a superhero movie!

The Incredibles 2 is in theaters everywhere.