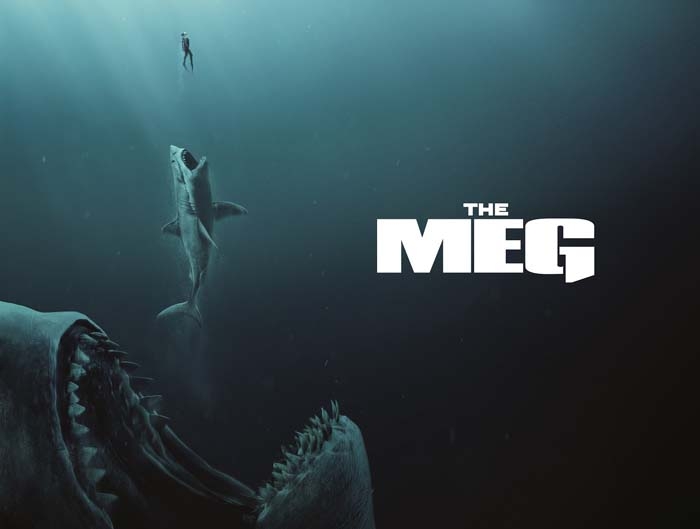 Positioned squarely between the classic Jaws and the comical Sharknado franchise, The Meg, blessedly, more closely resembles the former.  Maybe that’s because it’s tossed in a little Jurassic Park, just for good measure.

This is a good ol’ fashioned popcorn thriller that makes for a great end-of-summer outing.  Action star Jason Statham leads the cast, and I don’t know about you, but I always feel just a bit safer when he’s around.

It’s a feeling that’s needed with The Meg.  Enhanced by a John Williams-influenced score by Harry Gregson-Williams, we get a glimpse of what we’re in for within the film’s first few minutes.  This is about all you need to know:  a prehistoric shark that’s four times bigger than any fish Peter Benchley ever dreamed up is swimming around.  And she’s hungry.  And there’s a crowded beach scene.  And Jason Statham is there to help.  And I always feel just a bit safer when Jason’s around.  But…

holy Jesus that’s a big shark.  And she’s got a lot of teeth.

As I waited for The Meg to start, I realized I’d not seen a shark movie in the theatre since a 10-year-old Michael Patrick saw Jaws.  There’s a reason for that:  I was scared shitless.  I still think about it today.  One of my biggest accomplishments was going swimming off the coast of southern Florida a few years ago.  I say a quick prayer before I take a dip in the Sacramento River.

Deep Blue Sea, The Shallows, 47 Meters Down…they were all entertaining movies, but I watched them at home.  After Spielberg’s 1975 masterpiece, I couldn’t bring myself to see a shark flick in a darkened theatre.  I should have stuck to my guns on that.   Going in, I knew The Meg was all CGI and special effects, but…

I’m probably being too gracious to The Meg to even mention it in the same sentence as Jaws, the granddaddy of the modern summer blockbuster.  As I said up front, this one has a little bit of Sharknado thrown in too.  Some scenes were so close to parody that I wondered whether director Jon Turteltaub had intentionally placed his tongue firmly in his cheek.  The Meg’s finale ended that speculation — Turteltaub was in on the joke all along.  And he was smart to leave most of the blood and gore out of the movie, ensuring a PG-13 rating and a more family-oriented audience.

And thank God Jason Statham was there.  I always feel just a bit safer when Jason’s around.  But…

The Meg has opened wide (I LOVE that tag line!) and is in theaters everywhere.

Sacramento-based freelancer Michael P Coleman is a big fan of Jason Statham (DUH).  Connect with him and Coleman Communications at michaelpcoleman.com or follow him on Twitter:  @ColemanMichaelP.