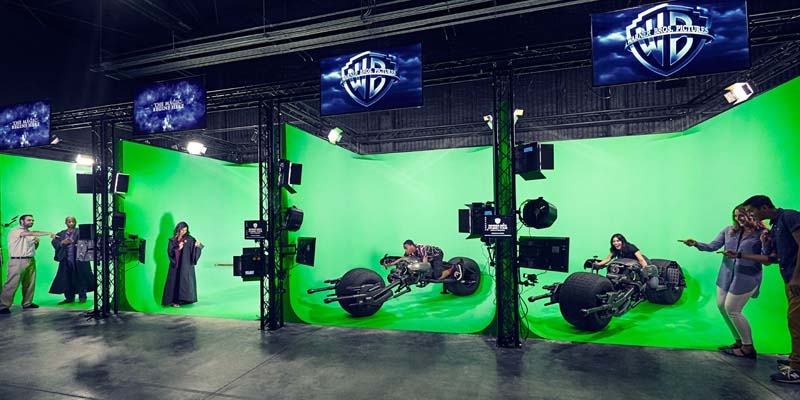 SPOILER ALERT:  Skip the next paragraph if you don’t want to hear about THE CAPE.

Warner Bros Studio Tour has it:  THE CAPE worn by the late Christopher Reeve in the film that started it all for me, 1978’s Superman: The Movie.  It’s displayed at the end of the tour, in all of its glory.  I almost missed it, and could have passed out when I saw it.

There are many capes on display during the impressive three hour Warner Bros Studio Tour, belonging to a wide assortment of superheroes, swashbucklers, and adolescent wizards.  But far beyond the fantasy and comic book genres, if you’re interested in the “behind the scenes” of Hollywood, there’s no better place to spend a few hours than touring the working production facility behind what’s arguably the most heralded movie studio in history.

After a brief filmed overview narrated by Ellen DeGeneres, trams depart for multiple television and film sound stages, through several TV sets (including “The Big Bang Theory” and “Friends”), and to a variety of backlots that have been supporting cast members in many classic films and TV shows.

Would you like to see the cafe where Rick had coffee with Elsa in Casablanca?  How about the alley where an upside down, rain soaked Spiderman kissed Mary Jane Watson?  The coffee shop from “Friends?”  How about exteriors for productions ranging from Oceans 13 to “The Waltons?”  They — and many, many more — are all there. 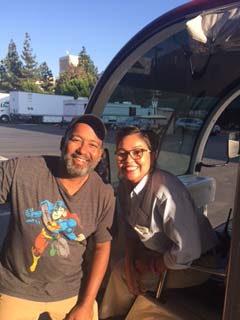 The tour is far from a whirlwind of sights for the eye, however.  Our tour guide, Amanda, tailored our experience to us, asking the dozen or so on our tram for the names of some of our favorite movies and television shows as we headed off.  During the tour, she gave us the inside scoop on the production of those favorites and other gems from Warner Bros’ catalog.  If you can jump on her tram, do it.

A part of our tour was an enormous warehouse that’s home to literally hundreds of thousands of props and set decorations from film and television.  Items are regularly rented to other production studios and the general public.  On the day of our tour, the Oval Office desk from “The West Wing” was available, and I had a chance to fill President Obama’s shoes for a few seconds.

One of the tour’s many highlights was the new From Script To Screen immersive exhibit, where you get to see actual screen tests from many of your favorite movie stars, including the adorable audition footage from the Harry Potter cast.  Speaking of JK Rowling’s magical world, you can fly on a broomstick or ride the Batpod (via green screen technology) and walk away with actual film footage of you in the movies.

Yes, I got on that broom. There’s an extra cost to take home pictures or video from that experience, but just like the price of the tour ticket, it was worth every cent.

The end of the From Script To Screen experience is the home of a variety of actual Oscars and Emmys garnered over the decades by Warner Bros, including those won for The Color Purple and the miniseries “Roots.”  Several revered movie props are also on display there, like “Chicken George”‘s derby and scarf, one of Errol Flynn’s swords from the 1939 classic The Private Lives of Elizabeth and Essex, one of Christian Bale’s The Dark Knight costumes, and THE CAPE. 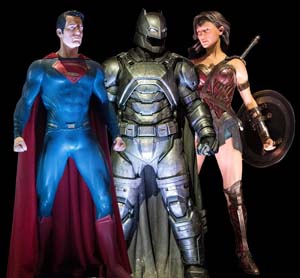 The tour offers another quasi-orgasmic moment for comic geeks: the new DC Cinematic Universe exhibit.  In addition to Superman-related props and costumes from Man of Steel and Batman v Superman: Dawn Of Justice (including a huge glowing piece of kryptonite!), you can check out Ben Affleck’s Batman costume, Gal Gadot’s Wonder Woman garb, and a variety of costumes and props from Suicide Squad, including those worn by Will Smith and Viola Davis.  I’m sure they’ll be adding more items next year from the upcoming Wonder Woman and Justice League films.

I was a little disappointed that The DC Cinematic Universe’s second floor was closed, as Warner Bros is adding items from the upcoming Fantastic Beasts and Where To Find Them to the exhibit’s already impressive collection of Harry Potter-related items. I’m told this section will be reopened by December.

And I forgot to mention: in another part of the tour, you can view all of the silver screen’s Batmobiles dating back to Michael Keaton’s from the 1989 feature film, along witha working, full-scale bat signal.  I was the only kid there over four feet tall who insisted on turning it on and off, casting that iconic bat light onto the far distant wall of that sound stage.  Just ask the docent for your chance.  And hold your breath.

Tours depart every half hour or so, but I’d advise you to purchase your ticket and reserve your day and time online in advance of your visit.  There are a limited number of slots available daily.

In terms of souvenirs, there’s an expanded gift shop at the end of the tour.  Buy the tour’s Official Guide.  It’s only $15 and gives you 66 pages of great Warner Bros history along with photos and anecdotes to help you remember your visit.

But now that I think about it, how would you ever forget seeing THE CAPE?

Get more information on the Warner Bros Studio Tour Hollywood at wbstudiotour.com.

This feature was written by Sacramento-based freelancer Michael P Coleman.  Connect with him at michaelpcoleman.com or on Twitter: @ColemanMichaelP… or just call The Daily Planet and ask for him.