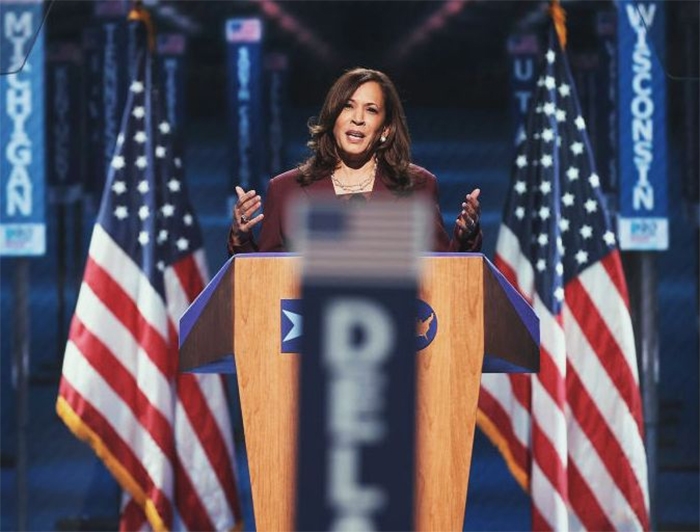 Senator Kamala Harris started her life’s work young. She laughs from her gut, the way you would with family, as she remembers being wheeled through an Oakland, California, civil rights march in a stroller with no straps with her parents and her uncle. At some point, she fell from the stroller (few safety regulations existed for children’s equipment back then), and the adults, caught up in the rapture of protest, just kept on marching. By the time they noticed little Kamala was gone and doubled back, she was understandably upset. “My mother tells the story about how I’m fussing,” Harris says, “and she’s like, ‘Baby, what do you want? What do you need?’ And I just looked at her and I said, ‘Fweedom.’”

This past August, that same precocious child, now a member of the U.S. Senate, stood on a stage in a nearly empty auditorium flanked by American flags and accepted the Democratic nomination for vice president, making history as the first Black and Indian American woman to do so. A week later, flanked by those same flags, she delivered a speech designed to deflect attention from President Donald Trump’s own speech later that night at the Republican National Convention. “Justice,” she said forcefully, boring into the eyes of viewers as she defended the right of peaceful protesters to take to the streets after the recent shooting of Jacob Blake by a police officer in Kenosha, Wisconsin. “Let’s talk about that. Because the reality is that the life of a Black person in America has never been treated as fully human. And we have yet to fulfill that promise of equal justice under law.”

Rewatching that speech as I prepared for this interview, I wondered if her words would be enough to inspire hope in those who need it most. Depending on whom you ask, hope is either the territory of the naïve or the antidote to our shared pain, but for the last four years, hope has become increasingly elusive for the most vulnerable people in this country. So, as the senator and I log into our Zoom call, I have a lot of questions—and a few trust issues. I don’t sugarcoat my words: I start by asking what many of us would like to know. How can people who have only known the underside of this country’s boot trust her, another politician, to do the right thing? How will the people with the least visibility know that she sees them?

For the full story, visit Elle.com/Culture.