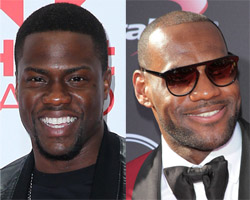 Actor and comedian Kevin Hart and NBA basketball star LeBron James will reportedly co-star in an upcoming basketball comedy movie, according to an article on EURWeb.com.

According to the article, the two will play brothers in “Ballers,” which will reportedly be written by Hart along with his writing partners. The movie is scheduled to begin shooting in summer 2014.