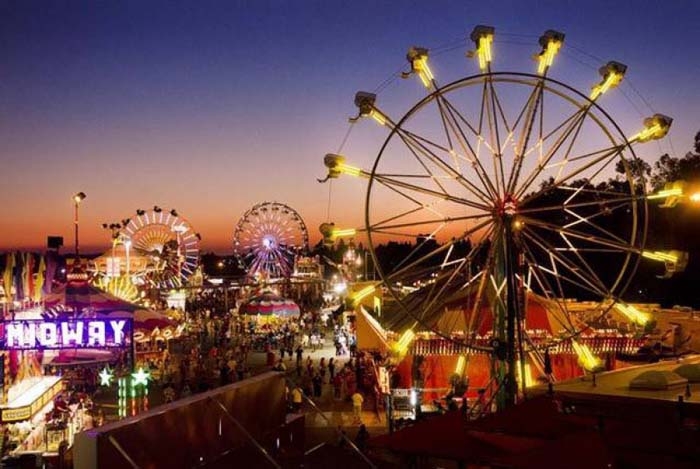 I hate that headline.  I love the California State Fair!  I’ll be a little down next week after it’s over for the year, but my mood will pick up with all of the increased cardio that I’ll do to work off some of that awesome Fair food.

The California State Fair runs through Sunday, July 29, so you’ve only got a few more days to get to Cal Expo.  It’s truly one of the joys of living in northern California.  My home state, Michigan, ended their long-running state fair a few years ago due to years of dwindling attendance, which is part of the reason I don’t take California’s for granted.

With the extreme heat we’ve been having (NEWS FLASH!  It’s July in Sacramento!), our friends at the Fair are prepared.

“We know it’s hot and we have 11 air conditioned buildings, 20 cool spots around the grounds with misters, and swamp coolers in the wine garden and food areas,” said Margaret Mohr, Deputy General Manager, Marketing & Development for the California State Fair.  “We want everyone to come out and have fun!  You can bring in your own sealed water bottles, and we have free sunscreen for everyone!  This is the last weekend and we don’t want anyone to miss out!”

Mohr forgot another cooling resource at the Fair, so I’ll tell you about it:  Wine Slushies.  HERE’S ANOTHER NEWS FLASH: the blackberry one is EVERYTHING.

Other California State Fair highlights this weekend include a concert by Grammy Award-winning group The Spinners on Saturday (free with admission to the fair), and Sunday’s Out At The Fair, a second annual gathering of northern California’s LGBTQ community, along with another free concert, by UB40.

One of that band’s signature songs is “Red Red Wine.” If that show doesn’t have “wine slushie” written all over it, I don’t know what does.  What a way to wrap up this year’s California State Fair!

Information on the California State Fair is available at castatefair.org.

Information on a GREAT deal to get increased cardio to work off your California State Fair food is available at planetfitness.com

Information on Sacramento based freelance writer Michael P Coleman is available at michaelpcoleman.com, or follow him on Twitter:  @ColemanMichaelP.  If you bump into him at the Fair, buy him a wine slushie and he’ll be your friend for life.