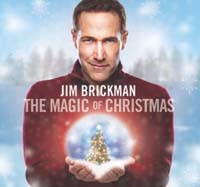 Dubbed “America’s Romantic Piano Sensation”, Jim Brickman lives up to the title.  He’s the most commercially successful pianist in the last 20 years, amassing 27 Top 40 hits (14 of them were Top 10), six Gold and Platinum albums, two Grammy nominations, and a Dove Award from the Gospel Music Association.  Jim’s music is sweeping and lush, and provides the perfect soundtrack for winding down after a tough day or cuddling with that special someone on a chilly evening.

Jim has just released his sixth (!) Christmas album, The Magic Of Christmas, featuring a collaboration with the legendary crooner Johnny Mathis, “Sending You A Little Christmas”.  The Hub sat down exclusively with Jim to talk about the new album, his collaboration with Mathis, what Christmas means to him, the secret to his career longevity, and why he still plays the piano he practiced on as a kid.

THE HUB: This is your sixth Christmas album!  What about that genre resonates with you?

BRICKMAN: Christmas is a time of year that especially connects my music with my audience.  It’s a most emotional time, the most magical time…and I love the melodies of Christmas, the nostalgia of it.  We all associate tastes, smells, and sounds — like music — with the holidays.  As a songwriter, I don’t often play songs that I don’t write, but when it comes to Christmas music, there are so many great, familiar melodies that I can do my own interpretations on.  I love Christmas as much as my audience does and it seems like a great time to celebrate music.  I don’t think I’ll ever be done with the love of those songs!

THE HUB: Me, either!  On this new “The Magic Of Christmas”, you partnered with someone else who loves Christmas music as much as we both do:  Johnny Mathis.   How did that duet come about?

BRICKMAN: Well, I’m a huge fan of iconic singers.  Johnny Mathis is a legend, and he’s earned that title.  He’s an unmistakable voice at Christmas, the epitome of a Christmas music artist.  As a fan, I just asked him to be on my album…I know that might sound like a boring answer, but that’s what happened!  [Laughs]  As it turned out, he was recording a new Christmas duets album featuring great artists like Natalie Cole, Gloria Estefan, and Billy Joel, so the timing was right.  Johnny loved my song so much that he titled his Christmas album after it, “Sending You A Little Christmas”.

THE HUB: A lot of times, these days, duets are recorded on different continents.  Did you guys record the song together?

BRICKMAN: Yeah, we were there together.  We recorded it at Capital Records in LA.

THE HUB: In addition to Johnny Mathis, you’ve got some other great partners on this album.

BRICKMAN: Yeah!  Sandi Patty’s on it [a medley of “Christmas Time Is Here” from “A Charlie Brown Christmas, and “O Christmas Tree], Broadway’s Megan Hilty [a cover of The Carpenters “Merry Christmas, Darling”].  Everyone on this record is of the same ilk.  They’re all classic, incredible vocalists.  It’s not a trendy, pop Christmas album.  It’s really a tribute to the classic Christmas albums of days past.

THE HUB: You have a great ear for choosing singers whose voices compliment your compositions.  Gerald Levert, Wayne Brady, Martina McBride…I’m wondering what your process is for choosing collaborators.  Do you have a list of people you’d like to work with and write for those voices, or does the composition lead to a decision about the collaborator?

BRICKMAN: I always want it to come from an organic reason for coming together.  For example, Olivia Newton-John and I met on a tour, and we developed a relationship that made me want to work with her.  Lady Antebellum was singing demos of my songs before they signed their recording deal, so they were already doing tour dates with me, so there was a relationship.  If that’s not there, I think it comes across as inauthentic, and I think the audience would be able to tell that.  It happened once where I was pushed to do a duet with someone, and I don’t think the results rung true.

THE HUB: Who was that artist?

BRICKMAN: I’ll tell you later!  (Laughs)  She sang a song of mine called “Never Alone”. Neither the artist nor I were doing it for the right reason, and I think because my music is so transparently emotional, people could tell.  I wound up re-recording it with Lady Antebellum.   I did a project with Michael Bolton, who was a friend of my songwriting collaborator.  Michael heard the song and said he totally connected with it and had to record it.  It just has to be authentic.  With Johnny Mathis, I played him a bunch of my songs.  He was talking about doing a classic version of “Silent Night”, and I was having trouble with that idea because with that song and Johnny’s vocal, my only contribution would have been arranging it.  That’s a contribution, but it’s not the same as writing a song that he’d sing for my audience.

THE HUB: You still write on the piano you learned to play as a little boy.  Why’d you hang on to it?

BRICKMAN: It wouldn’t occur to me to get rid of it!  Why would I?

THE HUB: Well, I’d think with you having achieved your level of fame and success, you might have replaced it by now.  We tend to toss things out a little too quickly in our society, I think…

BRICKMAN: Well, I’m a very loyal person be it with instruments or friends or employees or whatever.  I have a very strong connection with the way this all happened for me.  I don’t take any of it very lightly.  When I moved to LA, I always thought it was funny that people suddenly thought I was more talented in LA than they thought I was when I lived in Cleveland!  (Laughs)

THE HUB: Your career spans close to twenty years.  That’s an eternity in the music industry.  What’s behind your career longevity?

BRICKMAN: You have to love it.  If the work you choose is too hard, you won’t stick with it long enough for it to work.  Also, I’m a very curious person.  I always want to keep learning.  Like when something like the Johnny Mathis thing comes along.  I got to say “Wow, look at this experience.  I got to learn from him and work with him.” Those moments along the way remind me of why I did it in the first place.  It’s a passion for me.  It’s just who I am.  It’s what I have to do.