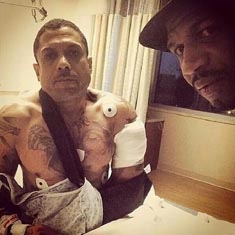 By: Contributing Write ShanayaMonique
Tragic news for the family of Raymond Scott a.k.a Benzino from VH1’s reality show Love & Hip Hop and CEO of Hip Hop Weekly: Benzino was reportedly shot by his nephew while they were proceeding to attend his mother’s funeral. The alleged shooter was Benzino’s nephew who claimed to be feuding with him over a subject that Benzino would not discuss. Benzino was saddened that this unfortunate event had to be on the day of his mother’s funeral. As of Sunday, March 27, the hip hop star is seemingly in good condition.
Click here to read full article at the NY Daily News.